US pilots overshot airport by 240km 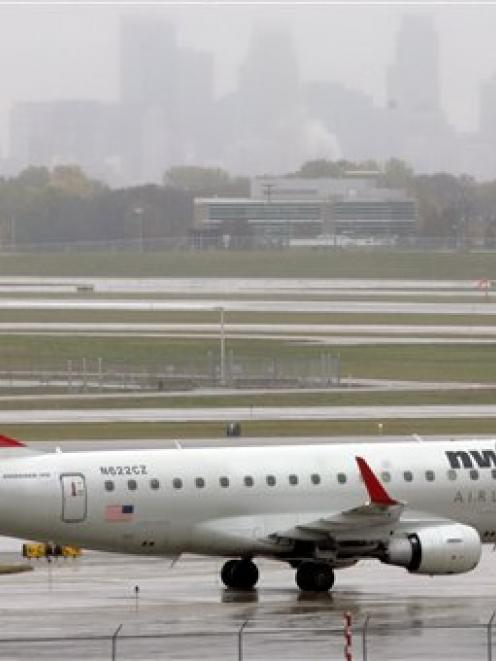 The Minneapolis skyline rises through the rain as an arriving Northwest Airlines jet taxis at Minneapolis-St. Paul International Airport. Photo by AP
Were the pilots distracted? Catching up on their sleep?

Federal investigators are struggling to determine what the crew of a Northwest Airlines jetliner were doing at 37,000 feet as they sped 240km past their Minneapolis destination, and military jets scrambled to chase them. Unfortunately, the cockpit voice recorder may not tell the tale.

A report released yesterday said the pilots passed Breathalyzer tests, showing they had not drunk alcohol, and they were apologetic after Wednesday night's amazing odyssey.

They said they had been having a heated discussion about airline policy. Aviation safety experts and other pilots were sceptical they could have become so consumed with shop talk that they forgot to land an airplane carrying 140 passengers.

The most likely possibility, they said, is that the pilots simply fell asleep somewhere along their route from San Diego.

"It certainly is a plausible explanation," said Bill Voss, president of the Flight Safety Foundation.

New recorders retain as much as two hours of cockpit conversation and other noise, but the older model aboard Northwest's Flight 188 includes just the last 30 minutes - only the very end of Wednesday night's flight after the pilots realised their error over Wisconsin and were heading back to Minneapolis.

They had flown through the night with no response as air traffic controllers in two states and pilots of other planes over a wide swath of the mid-continent tried to get their attention by radio, data message and cell phone. On the ground, worried officials alerted National Guard jets to go after the airliner from two locations, although none of the military planes got off the runway.

With worries about terrorists still high, even after contact was re-established, air traffic controllers asked the crew to prove who they were by executing turns.

"Controllers have a heightened sense of vigilance when we're not able to talk to an aircraft. That's the reality post-9/11," said Doug Church, a spokesman for the National Air Traffic Controllers Association. That is a reference to September 11, 2001, when terrorists captured four aircraft and crashed into buildings and a field in the United States.

A report released by airport police Friday identified the pilot as Timothy B. Cheney and the first officer as Richard I. Cole. The report said the men were "cooperative, apologetic and appreciative" and volunteered to take preliminary breath tests that were zero for alcohol use. The report also said the lead flight attendant told police she was unaware of any incident during the flight.

The pilots, both temporarily suspended, are to be interviewed next week by investigators of the National Transportation Safety Board. The airline, acquired last year by Delta Air Lines, also is investigating. Messages left at both men's homes were not immediately returned.

Investigators do not know whether the pilots may have fallen asleep, but NTSB spokesman Keith Holloway said Friday that fatigue and cockpit distraction will be looked into. The plane's flight recorders were brought to the board's Washington headquarters.

Voss, the Flight Safety Foundation president, said a special consideration was that the many safety checks built into the aviation system to prevent incidents like this one, or to correct them quickly, apparently were ineffective until the very end.

Not only were air traffic controllers and other pilots unable raise the Northwest pilots for an hour, but the airline's dispatcher should have been trying to reach them as well.

The three flight attendants onboard should have questioned why no preparations for landing were ordered. Brightly lit cockpit displays should have warned the pilots it was time to land. Even the bright city lights of Minneapolis should have clued them in that they had reached their destination.

"It is probably something you would say never would happen if this hadn't just happened," Voss said.

The pilots were finally alerted to their situation when a flight attendant called on an intercom from the cabin. Two pilots flying in the vicinity also finally were able to raise the Northwest pilots using a Denver, Colorado, traffic control radio frequency instead of the local Minneapolis frequency.

On the ground, police and FBI agents prepared for the worst.

"When the aircraft taxied to the gate, I was able to see the two white males in the seats of the flight crew, both were wearing uniforms consistent with Delta flight crew," said a police report, signed by an Officer Starch.

"When the aircraft had stopped, the male seated in the pilot seat turned, looked at me and gave me two thumbs up and shook his head indicating all was OK."

Air traffic controllers in Denver had been in contact with the pilots as they flew over the Rocky Mountains, FAA spokeswoman Laura Brown said. But as the plane got closer to Minneapolis, she said, "the Denver center tried to contact the flight but couldn't get anyone." Denver controllers notified their counterparts in Minneapolis, who also tried to reach the crew without success, Brown said.

Officials suspect Flight 188's radio might still have been tuned to a frequency used by Denver controllers even though the plane had flown beyond their reach, said Church, the spokesman for the National Air Traffic Controllers Union.

Controllers worked throughout the incident with the pilots of other planes, asking them to try to raise Flight 188 using the Denver frequency, he said.