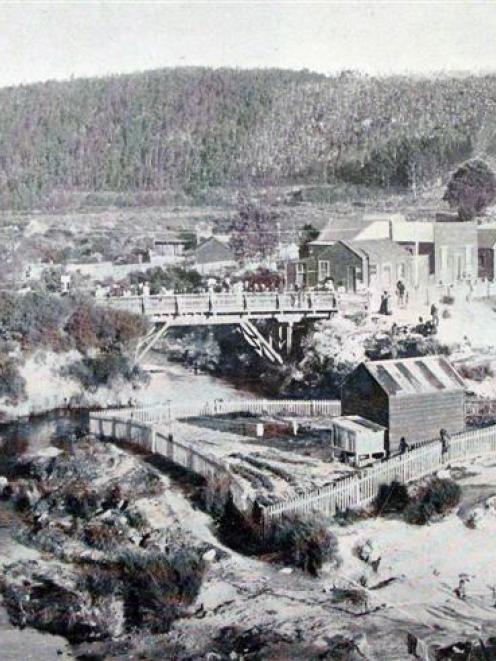 Whakarewarewa, a centre of thermal activity near Rotorua in the Hot Springs district of the North Island. - Otago Witness, 14.9.1910.
• The question of providing religious services for summer holiday-makers in the country was before the Dunedin Presbytery at its meeting yesterday in relation, particularly, to the growing popularity of Warrington and contiguous seaside resorts.

A report submitted recommended that a tent be procured at Warrington, but this proposal did not seem to find general favour although the point has not been settled, the matter having been referred to a small committee.

The Rev. J. Chisholm said it seemed to him that more attention should be given to these seaside resorts in the future.

The churches were almost empty for a few weeks in the year, and unless more attention were paid to the young people they would form habits which would doubtless be confirmed, and that would be to the injury of their church.

The Rev. R. Fairmaid brought the matter nearer home than the northern coast by referring to Broad Bay and the Peninsula.

A young man had told him that a kind of pagan life was lived thereby the young people who gathered for week ends.

This was a deplorable condition from the moral point of view, and, so far as he understood, there was no service provided by their people in these quarters.

The committee appointed could perhaps attend to this matter, too.

It was pointed out by the Rev. W. Scorgie, in concluding the discussion, that there was a Methodist Church at Broad Bay and a Presbyterian Church at Portobello.

• The League of Life is an organisation for men only, which discusses the complex problem of living.

It deals with each aspect of it under various heads, each one being under the charge of a chapter.

Last night the Chapter of Health met at Trinity Church.

Mr Howard Thomas, a medical student, delivered a most interesting address on the subject of preserving health, taking as his headlines fresh air, draughts, sunlight, dirt, care of the teeth, water, hot baths, flies, recreation, and purity of living.

On each of these Mr Thomas had something valuable to say, and at the close there was an animated discussion, and the lecturer answered a volley of questions.

• A letter was received by the Bruce County Council yesterday from Mr A. J. C. Brown, of Dunedin with reference to the growing popularity of Waihola as a summer resort.

He expressed the fear that permission might shortly be applied for to erect boatsheds on the little beach between the jetty and the railway line.

He considered that this would spoil the most attractive piece of foreshore in the vicinity, and urged the council to prevent the erection of any buildings there.