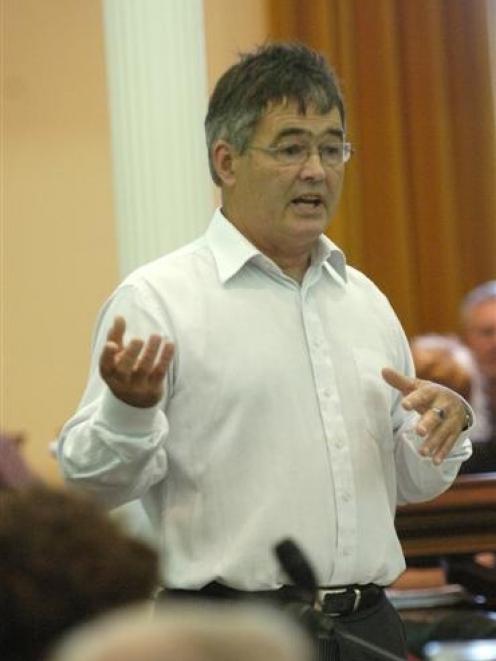 Councillor Dave Cull speaks against the stadium at a Dunedin City Council meeting in February. Photo from ODT files.
Before Monday's council vote on signing a binding contract for construction of the proposed Awatea St stadium, persistent critic and councillor Dave Cull argues that in its support for the project, the council has fallen out of step with its community.

Last month's Town Hall meeting asked the Dunedin City Council not to sign a binding contract for construction of the proposed stadium until after the community could make submissions to the annual plan consultation process in May.

However, a resolution to this effect was defeated the very next day by council.

The justification? Consultation occurred last year, and nothing about the proposal was significantly different from then.

So no further consultation was legally required.

In fact, much has changed. The most significant aspect for ratepayers is the funding model.

In addition, the DCC agreed to take a further loan of $19.2 million to bridge the shortfall in private-sector funding.

That is a total ratepayer liability of $111.5 million.

A question mark also hangs over the $15 million Central Government underwrite, also of the private-sector funding.

Does council have any liability for that?

We don't know yet, but it's possible the total amount at risk for council could exceed $160 million.

At least $40 million more liability in less than a year and that's not significant?That $15 million is an example of how council has set conditions and targets to reassure the community, but then ignores them.

In March 2008 council undertook to find $20 million from outside council sources to reduce the burden on ratepayers.

Subsequently, council asked government for a contribution, but when (to most people's surprise) the $15 million "underwrite" was forthcoming, it was promptly credited to the private-sector funding effort.

Far from the ratepayer burden being reduced, it was increased by council's consenting to borrow for the $42.6 million bridging loan.

Over the past year, numerous formerly robust aspects of the stadium proposal have become shaky.

Signed-up users for the multipurpose facility became only the Otago Rugby Football Union, and even they had not finally signed up at the time of writing.

But in their determination, (or desperation) to push the project forward, council and the Carisbrook Stadium Trust deny anything has changed.

Indeed, unseemly prevarication and fudging has become the norm.

The increase of $10 million was not really an increase because it was "overspend" on the land purchases.

Vague hand-written heads of agreement with the university and the ORFU are waved as finalised contracts.

They were conditions for continuing with the project.

Originally the community was sold a vision of a stadium that set new heights in New Zealand.

Now specification and fit-out downgrades to save some $6 million are described as "alignment with benchmark standards".

"The stadium will be capable of hosting a wide range of sporting and entertainment events, concerts, exhibitions, meetings, conferences and functions," we are told.

But we are not told what sports that refers to other than rugby, nor what extra fit-out and facilities will be required to achieve that touted range of uses.

The university will benefit enormously from the stadium, apparently.

But precisely what it will use it for, or whether any contract for that use has been signed, is unstated.

Expressions of interest from rugby league to farmers markets are trumpeted, only to vaporise under scrutiny.

Why is this uncertainty about the truth important?First, because all of the issues above impact on the stadium's ability to generate enough revenue to cover its operational costs, at the same time as it will have to service and repay the considerable bridging loan.

Venue agreements should give certainty of use and cash flow.

The facilities and the level of specification of the stadium will determine its usability and its earning power.

But professional reviews of the revenue projections identified significant risk of year-on-year deficits, and the design has been downgraded since then.

It could easily lose money every year from day one.

Secondly, the truth is important because when council is not transparent, when it fudges, when it fails to honour its own assurances, it loses the trust and support of the community.

Trust in the council and support for the stadium project have obviously both diminished markedly in the past year.

This is not, as is so often stated, opposition to a stadium per se.

Rather, it is an understanding of the growing, ongoing cost to the city and its ratepayers.

Three years after the project was touted as requiring at the very most 25% funding from the DCC, some 75% of the total cost is now proposed to come from or be underwritten by that council.

All of that will be debt.

The Otago Regional Council's $37.5 million must be added to that.

So the public now faces funding virtually the entire project.

It is undemocratic for council to ignore such overwhelming opposition from the people who have to pay, especially when the project is both expensive and discretionary.

Council needs to listen to the community, but in the main it resists doing so; not only by pre-empting the annual plan submission process.

Letters to the newspaper and emails to councillors run at least 30 to 1 against the project but are regarded as extremist agitation.

The largest public meeting on a local issue in years was disparaged by people who did not attend.

Instead, we are assured that a silent and invisible majority, a majority who apparently neither speaks up, nor shows up to meetings, nor even, it would seem, fills in survey forms, is massively supportive.

Recent requests for a referendum are swatted away on the grounds that since it is not compulsory to vote, the result would be inconclusive.

But all of us on council are there as a result of just such an "inconclusive" ballot.

This council has fallen out of step with its community, and sadly seems determined to stay that way.

Indeed, perversely, council seems determined to rush the project through when haste is unnecessary and requests for reconsideration grow ever more numerous.

Against all sense, in defiance of its democratic obligations, and in a welter of evasion and broken assurances, council seems intent on forcing its ratepayers to pay for an enormous vanity project that the community has repeatedly said it cannot afford.