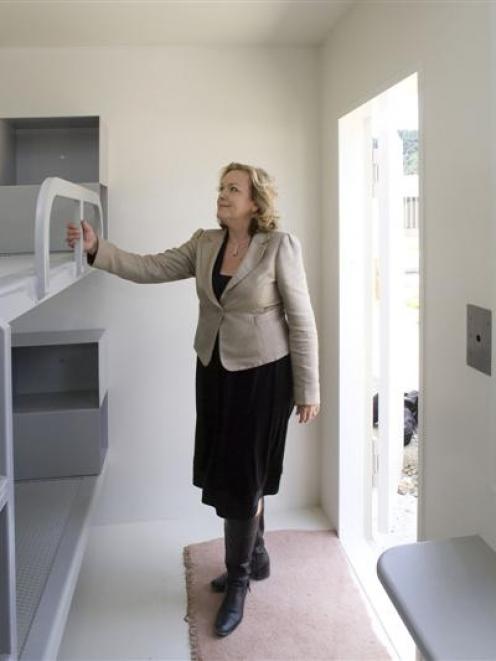 Corrections Minister Judith Collins inspects a shipping container cell at Rimutaka Prison, Upper Hutt. If the three-strikes sentencing policy is adopted, more capacity will be needed.
The "three strikes" legislation being considered by Parliament is being presented as an effective deterrent which will simplify court processes, hasten justice for victims, and punish criminals according to their crimes. Not so, argues Alex Penk.

Recent statistics show that violent crime is up.

This troubling news adds more fuel to the support for the three-strikes policy before Parliament.

But while the statistics rightly push us to re-examine our criminal justice system, expert analysis suggests this policy is not a solution, and may create real injustice.

The policy is triggered by committing one of about 40 qualifying offences, which include sexual violation, indecent assault, murder, manslaughter and aggravated robbery.

A first strike results in a warning.

On a second strike, parole eligibility is removed.

On a third strike, there are two consequences: first, the maximum sentence for the offence must be imposed.

Second, parole will be denied unless this is "manifestly unjust".

There is a different rule if the third strike offence is manslaughter - the maximum sentence of life imprisonment must be given, but the minimum period of imprisonment is 20 years, or 10 years if that would be manifestly unjust.

There are different rules again for murder if it is a second or third strike.

The court must impose a sentence of life imprisonment, and it must also order this be served without parole unless this would be "manifestly unjust".

If it would be, the non-parole period can be reduced to 10 years if certain other tests are met.

Note that the "manifestly unjust" provision is not a "get out of jail free" card.

It sets a high standard, and will be the exception, not the rule.

So what are the problems with this? Professor Warren Brookbanks and Dr Richard Ekins, of Auckland University, argue that the policy will create injustice and will have unintended negative consequences.

Dr Ekins argues that the key purpose of sentencing is retribution.

This requires us to judge and punish each particular offender's specific offence in a way that is proportionate to their wrong.

We must also, he says, treat offenders equally and sentence consistently.

However, the three-strikes policy conflicts with both these requirements.

The basic problem he points out is that a qualifying offence may cover conduct ranging from the very serious to the relatively minor.

But on a third strike, judges must impose the maximum sentence - they have no discretion to punish less serious crimes less severely, and more serious crimes more severely.

But it also includes cases that simply involve more than one offender, where violence is only threatened but doesn't occur - for example, where two men demand a woman's handbag on the street.

If both of those cases were third-strike offences, they would be treated equally and given the maximum sentence of 14 years, as though they were the same, even if the offenders in the second case also plead guilty and show remorse.

Of course, to count as a third strike those offenders must have committed other qualifying offences in the past, but those offences could be equally minor.

And as Dr Ekins says, they have already been punished for those offences.

Strikes do not expire, which would be a particular problem when someone incurs strikes in their youth, then reforms and commits a qualifying offence many years later.

Dr Ekins gives the example of a mechanic who, 20 years after incurring two strikes for minor offences, carelessly fails to fix someone's brakes, causing their death.

The mechanic should be punished, but he will have to be given a sentence of life imprisonment with a minimum non-parole period of at least 10 years - the same sentence that applies to murder.

Proponents argue that the policy will deter would-be offenders.

Prof Brookbanks is less optimistic, noting that the evidence is mixed as to whether California's three-strikes policy actually deters.

As he says: "If the fact of the existence of the criminal justice system itself is incapable of deterring most offending, why do we now think that a warning-based model like three strikes will be any more effective?".

He also points out that fewer offenders are likely to plead guilty - why do that when you stand to lose so much from accruing a strike, and when at least on a third strike the court can't discount your sentence for your guilty plea? This will tie up the court system, causing further stress for victims and significant costs.

And he argues denying eligibility for parole will reduce the incentive for prisoners to behave or to reform, making prisons more dangerous and less effective.

There's no dispute that serious violent offenders should face severe consequences for their actions.

Nor does anyone dispute that victims are entitled to care and compassion, and to be spared any more anguish than they have already suffered.

But if three strikes is flawed, what else could we do?Prof Brookbanks suggests more intensive "zero tolerance" policing.

Using the existing sentence of preventive detention more often would help, too, and increasing sentences for the worst offences is another option.

More resources could be put into policing, or into speeding up the court process, as the likelihood of being caught and sentenced promptly are important deterrents.

Early intervention is also crucial, as was recognised in the Government's Drivers of Crime document.

Given the flaws identified in three strikes, the Government should think again before it proceeds.

At a minimum, it should urgently consider some improvements, like allowing strikes to expire over time and allowing judges to give credit for guilty pleas.

If the policy continues in its current form, there is a real risk of serious injustice, with little indication of any corresponding benefit.

• Alex Penk is policy and research manager for the Maxim Institute.