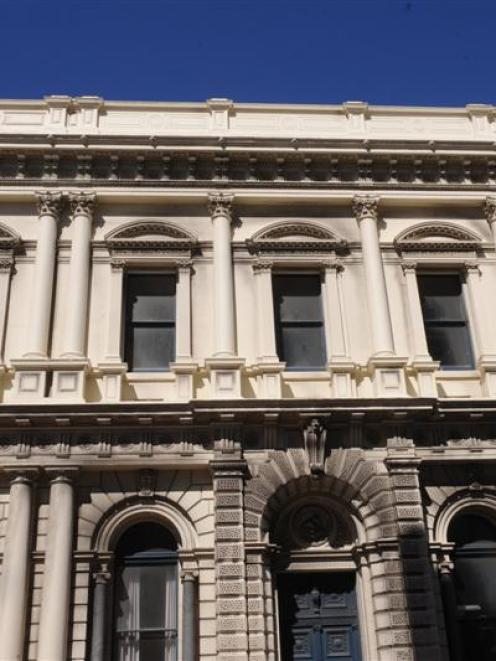 Former Bank of new Zealand BNZ, The Exchange
The disastrous Canterbury earthquake, hopefully, has had at least one positive outcome.

In the wake of the way it wrecked some of Christchurch's historic structures, it has also shaken off any complacency about the state of Dunedin's heritage buildings. And when pieces of the Barron building in Dunedin's Rattray St fell off, unprompted, the vulnerability of the city's buildings was underlined.

The time for Dunedin residents and Dunedin authorities to take notice was clearly overdue.

Almost everyone who visits Dunedin cannot help but be impressed by the "built environment", the array of buildings and precincts.

As well as premier sites, such as the railway station, First Church, the university clocktower and the law courts, the city possesses scores of buildings that reflect Dunedin's glory days as the mercantile and industrial centre of New Zealand.

The quality and the quantity of the historic buildings are the foundation of what makes the city so attractive for those visitors, and also for residents.

It is with pride, satisfaction and enjoyment that we revel in the beauty and interest of our past.

The series this newspaper is publishing raises many questions about the future of our past.

The scale of the challenge is monumental because so much of the fabric of so many structures, like the Barron building, is degrading. "Demolition by neglect" is happening in many places.

When water seeps through leaky roofs and structural timbers rot, there is no hope for the bricks and masonry they support.

Realistically, however, the costs and hurdles of redevelopment are sometimes too high.

The best that can be hoped for in some cases is basic maintenance to protect what is left.

Hope, nevertheless, lies in the international trend towards inner-city living.

Several buildings have been turned into apartments, and similar conversions must be encouraged. Rules, nationally and locally, while not undermining safety, must be flexible.

It is disturbing to learn, for example, of the troubles faced by Lawrie Forbes.

His tribulations, described in an article published today, are worthy of any episode of the television programme Grand Designs; an old building stacked with difficulties and complications, the owner's passion and vision, bureaucratic problems, unexpected twists and, in the end, we must trust, success.

One of Mr Forbes' frustrations is that, he says, windows are not allowed open to the street because of noise pollution fears. Thus, expensive ventilation systems are essential.

But do all city apartments have to be upscale? Is there room for a cheaper version - traffic noise and all - when the alternative is historical buildings falling down? We do need to recognise and celebrate those people, like Mr Forbes, who battle the odds and put their money and soul into renovating old buildings.

They are contributing significantly to the public good.

Calls have been made for national funds, through the Historic Places Trust, to support the Dunedin City Council heritage fund.

Dunedin is, indeed, the prime centre for historic buildings and it is too much to expect the city to do it all by itself.

Of course, extracting such money in the present climate will be difficult.

The council has not been inactive.

It puts aside $80,000 a year for the fund, can offer some rates relief and sponsors a heritage reuse award.

It adopted a heritage strategy in 2007 and out of that a heritage buildings economic reuse steering committee, with representation from building owners and the Historic Places Trust, has been set up. That committee is looking at what barriers stand in the way of reuse.

A key matter is far more flexible zoning in historic areas, such as between Crawford St and Cumberland St, to allow for effective and/or imaginative uses.

There are no easy answers for complex and costly challenges like those facing Dunedin and the owners of the buildings.

Nonetheless, the issues can be tackled on several fronts and the deterioration slowed.

Christchurch woke one day last year to find that nature had damaged beyond repair what in effect were the city's heirlooms.

In Dunedin, these are being destroyed by degrees.

Vigorous and determined efforts are vital to prevent the city and its residents suffering the same sense of loss.