Liberty lesson for nation in a bubble 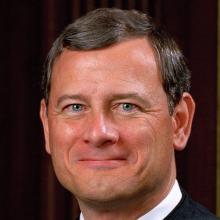 John Roberts
The chief guardian of freedom in the ``land of the free'' will give a speech tomorrow evening. But it will not be free. Welcome to today's wobbly ``Western'' world.

Decent, upstanding, even erudite and pillar-of-society non-terrorists will be subjected to the indignity of a security bag check and X-ray on their way in to an address by the august John Roberts, Chief Justice of the United States Supreme Court.

Such is the ``freedom'' this pillar of liberty will bring with him to this docile town.

The screening will tell his listeners they are guilty until proved innocent - as our airports tell us.

Parliaments, including ours which security-screens visitors, have been eroding the common-law presumption of innocence until proved guilty.

On the road in your car you are guilty of drink-driving until cleared by breath-test. The police officer does not need ground for suspicion. Once, that would have been wrongful arrest.

Peter Dunne, loudly self-proclaimed liberal, declared a buyer of pills with tiny amounts of morphine to be a possible illicit drug manufacturer.

The ``West'' has long proclaimed liberty as the foundation of enlightened civilisation. Hence the progressive evolution of liberal democracy.

But regressively we in the ``West'' have taken fright at the threat, and occasional actuality, of violence and restricted liberty to protect liberty.

This country, being distant from tyranny (so far), has gone less far than most down that track. In summer you can still picnic on Parliament's lawn.

Try picnicking close up to the White House. You would likely encounter a member of one of the most dangerous orders in the United States: a police officer.

If you happened on a senator of Mr Roberts' Republican Party you would, unless it was one of the two dissenters, learn that the poor should not have healthcare.

How did the ``land of the free'' get to that point? What is free about no healthcare?

How did this ``free land'' get a president who early this month worried loudly that the Western order is at risk but demonstrated he is a big risk to that order by choosing to make that statement in Poland, which has been undermining liberal doctrines required in the European Union of which Poland is a member-state?

That deeply and dangerously flawed president got where he is because his Republican Party has all but lost a sense of moderate conservatism - the sort Bill English broadly adheres to. He got there also because the voting system is undemocratic in ways which Mr Roberts' court has upheld.

With exceptions, such as John McCain, not long for this world, the Republicans are a toxic concoction of small-state ideologues and those who fear the Tea Party's extreme social and economic nativism and its spreading of nasty untruths about those it opposes. The President fits.

Contrast the strong belief in the ``Western'' liberal order held by Angela Merkel and Emmanuel Macron, who want to strengthen and unify Europe - which a deeply riven ``ruling'' Conservative Party in Britain is (mostly) bent on exiting and so weakening.

This disorder makes room for the hoodlum conduct of Vladimir Putin in his region and in harbouring hackers of liberal democratic activities and actors.

It makes room for Chinese President Xi Jinping's expansive, militaristic self-confidence in the South China Sea, in Hong Kong and across Asia.

Chief Justice Roberts' President thinks he can do deals with these people because he believes has been a deal-maker all his life - with other people's money and through serial bankruptcies.

The President's international conduct so far is erratic, small-minded America-first. When he doesn't get his way, he doesn't play. Five decades of United States' liberal-democratic leadership has ended.

All this is outside the bubble of calm in which our election is taking place.

Also outside that bubble is a global economy with asset values so distorted in rich countries and debt so high there, in China and in emerging economies that another big shock is distinctly possible.

Steven Joyce has drawn attention to that risk/threat in his scoffing at Labour's relatively restrained alternative budget (which in effect will extend National's eight years of raising effective income tax rates by not raising thresholds in line with wage rises).

Mr Joyce is much given to scoffing.

But the other Steven Joyce is all soothing: National has the settings right and life will get better.

With 60 days to go, the odds on the bubble deflating before voting day are very small and if it does begin to deflate, the impact is likely to be small.

But, come October, whoever is in charge will have to navigate in an unsteady world - and may find sometime next term that air is escaping from our bubble.

That is quite apart from the near-certain post-September deflation of title for some of those now highly placed if the vote goes badly for their parties. The talking is well under way.

Nothing comes free. As the Chief Justice's X-ray screening is, in effect, telling us.