May this wonderful old hall of musical memories stand forever 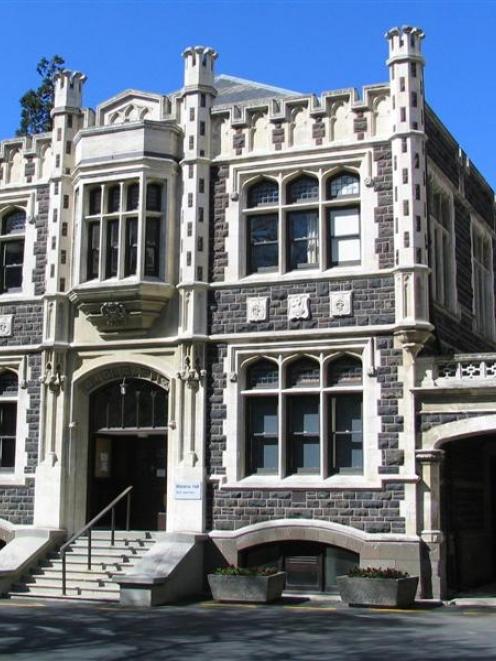 Marama Hall. Photo supplied.
The University of Otago's Marama Hall has bobbed and weaved its way intriguingly through my life, music most often the lure.

But I remember it most frighteningly for academia.

My first university lecture was there.

Education 1 was its simplistic title, and the class was swelled by a tsunami of teachers college students.

The joke then was that people went to teachers college to find a partner.

Interestingly, a survey we all had to fill out early on in that class asking us why we were at university posed that very question.

On that first day, I was probably looking for a partner, too.

Straight from a boys' school and ergo three years behind, at least, the lucky swine from the co-ed institutions, I chose a seat in Marama Hall surrounded by metres of space.

Basically, I was pleading.

Had I been wearing a placard, it would have read ''Please Attractive And Intelligent Girl Preferably With Long Hair Sit Beside Me There Is Plenty Of Room I Have Been At A Boys School For Five Years And I Am RUSTY.''

Instead, in a blur of black and white hound's-tooth, a jacketed old man, probably almost 35, hurtled along the long bench until his hurtle was stopped by my bag, put there at the last second when I saw him hurtling.

He struck out an ageing hand, told me his name and said, ''gosh, university, this is the place to make friends, isn't it?''

I never came early to Education 1 again, waiting until the utterly spottable hound's-tooth was seated harassingly distant before I sat down.

After three unexceptional years studying education, I was replaced at Marama Hall by my mother, who came out of retirement to become secretary of that department.

She was known for her inimitably vivid couture, but never the black and white of hound's-tooth.

Before I was born, my grandfather, C. Roy Spackman, organist and choirmaster at Knox Church, music teacher at both Otago Boys' and Otago Girls' High, composer, violinist, teacher, all sorts of musical things, had done his bachelor of music degree late in life.

He often performed in Marama Hall.

Family folklore had it that his final papers were so good they became university texts.

Years later when our 8-year-old son delivered a recital at Marama Hall, the climax to a year's tuition at the hands of a spiky-haired music student called Nigel, elderly music people swarmed from everywhere saying the boy was a chip off the old block.

My grandfather, that is, not me.

He had certainly played and bowed perfectly, but the deal was, do this for one year and then decide if you want to continue.

We assumed the beauty of music and the piano would triumph.

Once he had straightened his tiny body from the bow and walked off stage, he never played again.

However, his recital remained the finest thing I saw at Marama Hall until soprano Anna Leese did her master's degree performance there in 2003.

I think that was probably better, but let's be fair, you can't compare oranges with bok choi.

Last week it was singing again, a Soprano MUSI140 Song Recital from one of our neighbour's many daughters, who had self-deprecatingly announced this on Facebook as The Assessment of Doom.

But she is one of those people who gets A for everything and plays down each achievement until it has been driven underground.

Already proficient in pretty much everything, she had turned to classical singing this year, and far more significantly, proved that The Renaissance Woman can still thrive in a city with a wretched retail climate by mastering, part-time, pavlova packaging at that food's local factory, a vein-burstingly difficult skill.

I could feel her nerves as the examiners, with their clanking jailers' shoes, took their upstairs seats, the same seats where I had trembled with nerves myself waiting placarded for a partner 48 years before. But the songs and arias went beautifully.

I guess my next visit to Marama Hall will be for one or two of the grandchildren.

I hope this lovely old building is never knocked down.