One for the too-hard basket 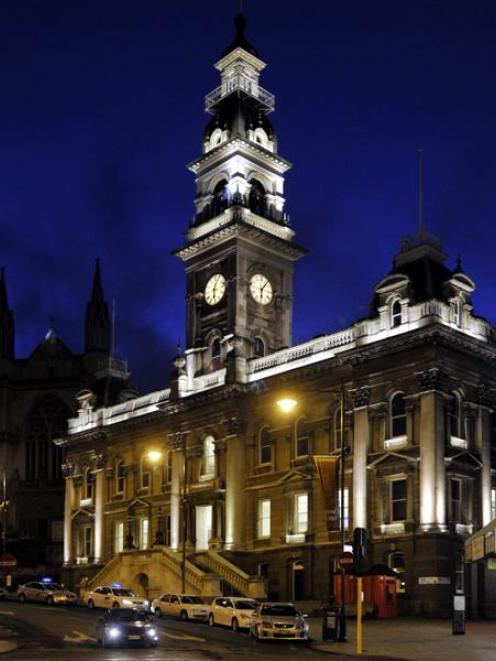 The Municipal Chambers in Dunedin. Photo by Gerard O'Brien.
The shadowy and little-known existential infrastructure services unit at the Dunedin City Council was set up to deal with issues of existence, philosophy and the absurd. The unit was housed in crawl space behind the stone facades of the Municipal Chambers and its reception area was an intolerably low and stuffy room in the ceiling of the Skeggs Gallery.

The unit was disbanded not long after it was set up, amid dark rumour and angst at the Civic Centre. Through the Local Government Official Imagination and Fiction Act, David Loughrey uncovered its first and only report. It gives some insight into the short life of a visionary, but ultimately doomed experiment by the DCC.

The Human Condition in a Dunedin Environment - A Dunedin City Council Policies and Bylaws Review.

The Human Condition (Dunedin) Working Party was established under the auspices of the Existential Infrastructure Services Unit in 2014, after council staff identified widespread concerns among ratepayers about the human condition. Those concerns included confusion about the meaning of life, worry about the transience of existence, and, most importantly in Dunedin, exasperation over human awareness of the certainty of death. The working party consulted with stakeholders on the best way, going forward, to introduce policies and bylaws at a local government level to resolve these issues.

Sadly, staff encounters with some difficult Dunedin suburbs stood in the way of this matter, going forward. The General Manager, Existential Infrastructure, has concluded:

• Despite extensive stakeholder engagement, and attempts to develop substantial, wide-ranging reports to define the issues, staff are further than ever from establishing anything at all.

• The singular nature of the Dunedin psyche, and its effects on the health and safety of staff involved in the exercise, mean any further attempts to develop policies of this nature should be stopped immediately.

Recommendations on this matter are listed below.

(i) Policy: No. No policy is recommended, and any developed by councillors should be well hidden in the Dunedin District Plan between Rural Zone Rules and the Significant Trees Schedule.

(vi) Sustainability: Yes. Sustainability, going forward, will entrench and facilitate mindfulness in terms of the long-term provision of wellbeing in Dunedin.

That the council notes this report, provides counselling for staff, then quickly forgets the whole matter.

The Human Condition (Dunedin) Working Party was established after several irate ratepayers contacted the council upset the human intellect allowed them foreknowledge of their own death.

This led to feelings their lives were pointless. Some blamed the council, and demanded something be done.

The working party began a complex investigation of the issue in early 2014, covering everything from the nature of truth to the possibility of the discovery of ultimate meaning.

The working party disestablished three minutes later, after a staff meeting descended into a fracas during a debate over the human capacity for good and evil, and the relevance of those qualities to South Dunedin. The working party was re-established the following day, and made some progress on developing a philosophical framework for Roslyn, despite the failure of staff to find any evidence of that suburb's soul.

Some work was done to establish the objectivity of truth in Maori Hill, though development of an effective policy came unstuck after residents argued rules and laws did not apply to those in higher socio-economic suburbs, and started expensive legal action against the council.

Northeast Valley was considered as a site for staff consultation on how the individual interprets the world, however early results from residents proved so bizarre and obscure it was concluded the suburb was too alternative for inclusion in the study, let alone wider Dunedin society.

A staff member sent to Waitati on the same mission was never heard from again.

Another study in North Dunedin interviewed residents on the human capacity for introspection: no such capacity was found in the suburb.

Staff returned from their work near the University of Otago campus fearful for the future of civilisation under the next crop of leaders, after repeatedly clashing with arts students on the issue of existential nihilism.

By early May, some staff were finding the stubborn, wilful complexity and recalcitrance of the Dunedin public more than they could bear.

Those who had moved to their council jobs from outside the city, and were unaware of challenging nature of the Dunedin psyche, were suffering from severe existential angst.

A third came to the conclusion life had no meaning, and decided she would be better off in Auckland, where meaning was not required for a successful life.

A final staff report on The Human Condition in a Dunedin Environment - A Dunedin City Council Policies and Bylaws Review, offers only oblique views and fleeting glances of staff work to identify and find solutions to the human condition in Dunedin.

While some real progress may have been made, the subsequent psychological trauma staff underwent means that progress is most likely now locked, in a twisted and warped state, in their own damaged psyches.

The working party that undertook this work is now disbanded. The report is attached, but can only be seen in a completely dark room, in the peripheral vision of the reader, and only on certain occasions that can ascertained by employing mathematical formulae involving the transit of the moon. It must only be discussed with a team of psychiatrists on hand, and with the public excluded.

Going forward, it is suggested a hard line is taken with ratepayers concerned about existential issues, and any approaches to council on this matter be referred to the Otago Regional Council.

• It is unknown what councillors decided on this issue, but many are known to have taken an extended break shortly after the December 24 meeting. Readers can draw their own conclusions. Minutes of the meeting are classified.