Passion fruit to the rescue 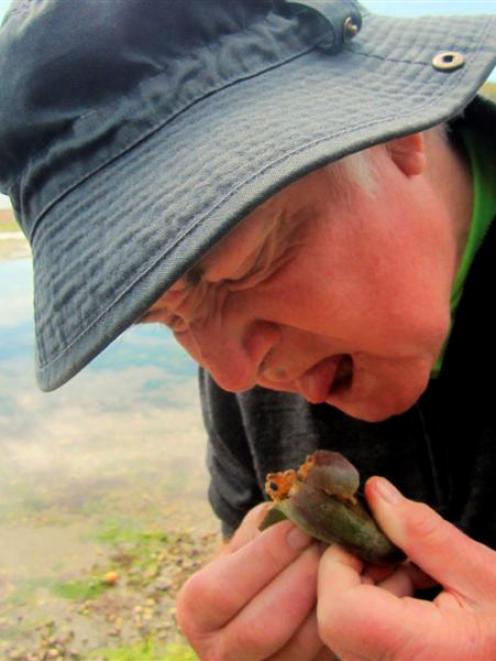 Roy Colbert's unnamed companion does not appear enamoured of the taste of wild passion fruit. Photo by Roy Colbert.
It is fair to say rational thinkers were terribly miffed when details were revealed that the mesmerising TV adventure series Man vs Wild had a bit of trickery going on.

I think as rationally as any human, and I thought this show was real, that the wondrously named Bear Grylls was the bravest and most skilful man alive.

Well, he still pretty much is, the trickery they unearthed wasn't so very bad.

The show's producers admitted rafts were built from nothing by the crew and then taken apart in front of Bear so he could build them again in the jungle when seemingly lost and alone.

There was also talk of Bear jumping across fake lava and earnestly wheezing smoke machines, lassoing already tame Mustang horses, and even fighting a bear that was a man in a bear suit.

I was reassured to learn he didn't fake eating all those horrible insects.

But the concept of man fighting the wild is a stirring one, and I was reminded of this last week when I joined a party travelling down to Purakaunui to collect clams and look at water.

There is always something on the telly I would vastly prefer to collecting clams and looking at water, but on this occasion I agreed to come, knowing in my heart, with my complete lack of survival skills, that it would be a hoot challenging earth, wind and fire, even though the result would probably be a page one tragedy and possibly a slow intestine-wrenching death.

Roy vs Wild is not a fair contest, even as satirical television.

We were tested before hunting began by a cruise ship the size of the Municipal Chambers berthed at Port Chalmers.

Bear Grylls has never faced a bigger or more drop-dead-hideous thing than a giant cruise ship packed with badly dressed Australians, all of them, to a man, to a woman, budgeting like buggery, blocked us out of the local dairy, thus preventing me from buying a goody-goody-gumdrop ice cream I desperately needed to arrest a dangerously low blood sugar.

I guess it was the sugar-draining excitement of the clam hunt, and forgetting to pack the diabetic's medicine, jellybeans, certainly didn't help.

So we headed over the hill to Purakaunui with me slumped and hallucinating, veritably on the cusp of a locked-jaw diabetic coma, a successful damages claim against the cruise ship unlikely to succeed because cruise ships are very important for the Dunedin economy.

We had checked the tide and it was low, bucket-filling time, unlike my hysterical last visit at full tide when we waded out to our waists at full tide, pinching noses with thumb and forefinger before diving deep for the now-unfindable clams, or cockles, or whatever they're called, locals pointing at us with rollicking bellies from the shore.

But on this day I could no more fill a bucket of clams than pass a Mustang horse through the eye of a needle, so I went for a walk into the jungle adjoining the park, knowing if I couldn't come up with calorie-filled plants or insects like Bear Grylls does every week then I would die.

Luckily, with only a sand-speck of sight remaining in my one working eye, I spotted some paisley-coloured oval berry things hanging from a branch, and I tore into them like a crazy man, teeth gnashing like gnashing teeth.

I don't remember much after that. Near-coma abandons taste in favour of texture, and only the message of a mushy swill was sent to the brain.

I do remember staggering from the jungle slowly cognisant of my surroundings and the returning cockle collectors.

They greeted me as they would greet a Japanese World War 2 soldier emerging from three years of forestral hiding.

Two asked why I had passion fruit on my face.

I am at one with Bear Grylls; he is a good man, a man as brave as Pheidippides and as deceptive as Houdini.

I will return to Purakaunui. With jellybeans.