PM's fall not the only stumble in Labour camp 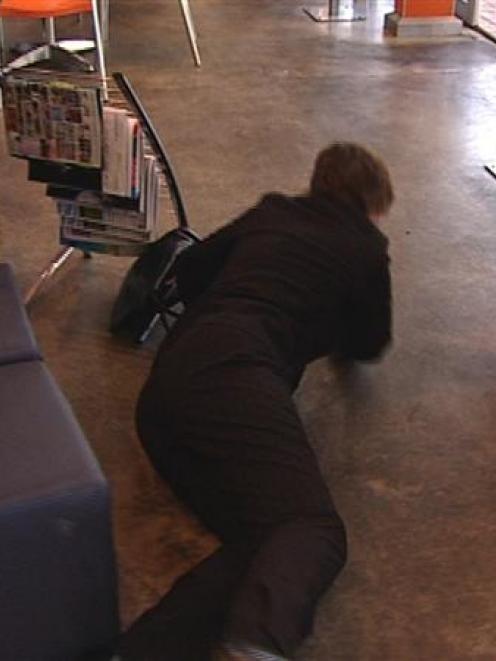 Helen Clark tripped at a Christchurch mall on Thursday. Photo from 'One News'.
In the wake of the Prime Minister slipping and falling while going walkabout in a Christchurch shopping mall, those of unkind mind have noted the same thing happened to John Howard in the lead-up to last year's Australian election.

Both prime ministers quickly recovered their poise. But Mr Howard, of course, went on to lose.

If the same fate befalls Helen Clark next Saturday, then this week may have been the turning point in the 2008 election.

That will have nothing to do with Miss Clark tumbling flat on her face. But Labour did trip itself up this week; the cynicism and arrogance of power coming back to bite it with a vengeance.

That was most obvious in Labour's latest attempt to dredge up something, anything, in John Key's foreign exchange dealing past which might make voters question whether National's leader has the integrity worthy of a prime minister.

Labour believes it is perfectly within its rights to probe Mr Key's character. That may be so. But New Zealand voters have huge difficulty with investigations into MPs' pasts and private lives. Some discretion is required on Labour's part.

Yet, it clumsily seems to think it can fool the public that it is performing some kind of public service that gives it the latitude to parade the flimsiest material as proof of Mr Key's unfitness to govern.

When it turns up nothing - and no less a figure than the party's president is doing the digging for dirt - Labour simply looks like it is driven by a fatal mix of arrogance and desperation.

Hardly a good look in the penultimate week of an election campaign.

The dirt-digging is the consequence of Labour's frustration in failing to land a really damaging hit on Mr Key in the way it could on true acolytes of the free market like Don Brash and Jenny Shipley.

The centrist Mr Key is a far more difficult political animal to demonise.

And even more so when he out-Labour's Labour as he did yesterday with National's transitional relief package for those laid off in the deepening recession.

By giving extra assistance to those getting Working for Families income-support entitlements and the accommodation supplement, National's package is targeted at the lower end of a drastically tightening job market.

In contrast, Labour's new job search allowance has the side-effect of offering financial assistance to the wealthy, while ignoring one-income families in lower socio-economic strata.

That has left Labour able to do little more than nit-pick over National's package, while National is able to highlight major inequities in Labour's.

The latter package is badly-drafted and was obviously rushed out on Thursday to counter National's far more coherent effort.

Worse, Labour is trying to pull the wool over voters' eyes by giving the impression anyone made redundant will benefit from its package.

That is not the case. But you would be little the wiser from reading the deliberately misleading press material.

Add to that the old trick of releasing the package in the afternoon so the mass audience evening television bulletins got little time to dig deeper - and Labour got the once-over-lightly media coverage it wanted.

Such overt cynicism will cost Labour little, however.

Throwing mud which failed to stick to Mr Key is a very different matter. That blunder has ended up only reinforcing Mr Key's standing.

Some achievement a week out from polling day.