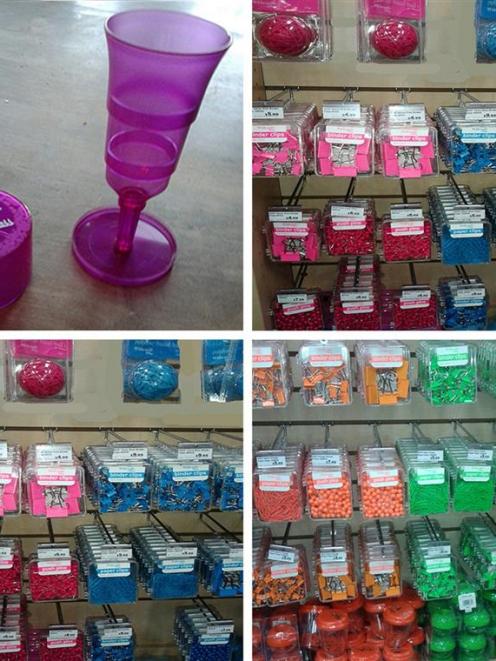 Plastic fantastics and other things. Photo by Roy Colbert.
In the fetid rotting swamp that is modern retail, many established shops have chosen diversity to survive.

Music shops sell clothes, coffee and books, bookshops have added the previously forbidden food and drink, and cinemas now deliver all manner of munchies to your seat, a drive-in without having to drive in.

But who would ever have guessed Whitcoulls would turn itself into a confectionery store?

This is not the Whitcombe and Tombs I remember as a child down by the Exchange, a vast area of books with primary school quizzes in the holidays, sadly revealing that my school was not as smart as I thought it was.

No, this is a new Whitcoulls, owned by several companies in recent years, and currently by the people who turned the Farmers chain around.

Smart people, we would assume, people who know how to make a silk ear out of a cow's purse.

Whitcoulls have had confectionery before, in token quantities, but they have not only increased their range, they have now signalled what will surely eventually become a complete changeover to lollies only by making all their stationery LOOK like lollies.

I almost had to shield my eyes from the psychedelic vividity of their paper clips, rubber band balls, binder clips and round pins when I was in there last week.

Some alleys in the stationery department simply could not be entered, such was the stinging stab to the eyeball.

I am obsessed with retail, as readers of this column well know, and 35 years in the game selling music, and, let's be honest, back at the start when I was stupid, soapstone ashtrays, licorice rolling papers, coloured beads, Welsh fudge and Frisbees, taught me an awful lot about attracting punters.

And the new Whitcoulls owners have got it right.

Sure, you can still find the odd book at Whitcoulls, if you look hard enough, and magazines have been retained, albeit right up the back, but the changeover will necessarily be slow and subtle, and exciting little coloured things that desperately small children in prams can reach out and eat or steal - the retailing basis of all supermarkets, sucking pram-pushing parents in there when they are much happier in a corner dairy - are now the merchandise du jour of this once iconic retailing giant.

Children out of prams but not yet terrorising primary school teachers have reportedly been similarly attracted to the colour and lollie-lookalikes.

''Mummy, can we go to Whitcoulls where they have those yummy green lollies?'' asks Perfidia.

''Sweetie, they are not lollies, they are paper clips.

And Perfidia cries and screams and stamps her tiny feet and Mummy takes her to Whitcoulls.

Children who have become grownups but maintain the mental age of a child, and I am one of these people, let's make no bones about that, have also been falling prey to the store's brilliant new strategies.

Last week, when I was revelling in all the hallucinogenic flashbacks that the stationery department had to offer, I also couldn't help but notice a fascinating little stack of boxes by the checkout island bearing the tongue-tempting title, Pop Up Wine Glass.

''What exactly is this?'' I asked a Whitcoulls person, knowing just how ruthlessly well Whitcoulls people are trained to lead customers down the correct path at exhausting weekend sales seminars.

So I bought one.

It does indeed pop up after greeting you out of the box as a small round plastic thing.

Just two yanks and you're in business.

Presumably a law of physics will prevail when you fill the seemingly precarious plastic tower and it won't collapse and spill wine all over your tummy, I mean, it wouldn't be called a wine glass if it did that, it would be called a magic trick.

Or a cruel jape.

And no, I haven't tried eating it yet. But I will and I know it will taste yum.