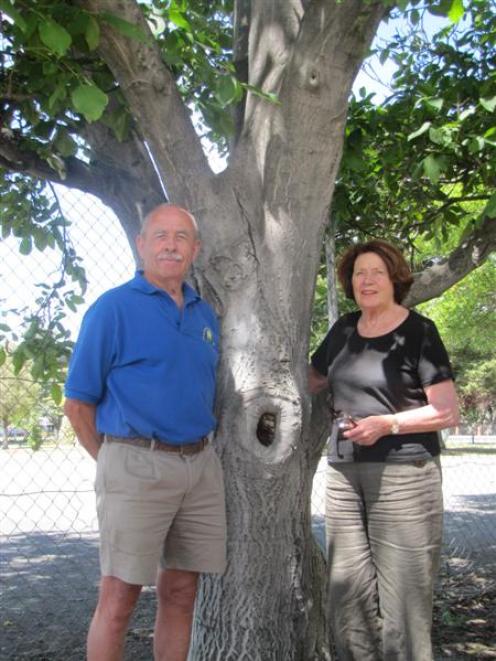 Central Cultural Centre Trust chairman Bert Kemp and Alexandra Museum president Gill Grant want a proposal to remove a walnut tree, pictured, and an ash tree near Central Stories Museum and Art Gallery deferred until the public has been consulted. Photo by Colin Williscroft.
The Vincent Community Board has been called on to shelve a proposal to remove two mature trees from Pioneer Park, Alexandra.

At its meeting on Monday in the Central Otago District Council chambers, the board is due to consider a proposal to cut down a walnut tree and an ash tree.

The trees are on the northern boundary of existing tennis courts where the board, in August 2009, recommended laying a new multi-purpose artificial surface the size of three tennis courts.

Central Cultural Centre Trust chairman Bert Kemp, of Alexandra, said the community should be consulted before the trees, both 25 to 30 years old, were removed.

"The decision [to cut the trees down] should be deferred because there has not been enough up-to-date consultation," Mr Kemp said.

The last time the public was consulted on the future of the tennis courts at the park was 2002, he said.

Alexandra Museum president Gill Grant said if the board resolved to cut the trees down without finding out what Alexandra people wanted, it would be a "terrible decision".

"We're not trying to cause trouble. We want the best outcome for this space, in this town, at this time."

The community board's decision in 2009 to locate the artificial surface on the Central Stories' boundary was the wrong one, Mrs Grant said.

It should have opted to put it halfway between the museum and McArthur Gardens, on the corner of Centennial Ave and Tarbert St, Mr Kemp said.

CODC chief executive Phil Melhopt said putting it there would increase the cost of the project by $60,000 to $90,000. This was not possible, he said, given the funding the project had already been pledged.

It was not a given that the board would approve the removal of the trees, Mr Melhopt said.

"There is a clear recommendation for the community board to consider but it would be inappropriate for me to second-guess what it might decide."

It was likely that interested members of the public would get the opportunity to speak to the board about concerns over the recommendation to remove the trees, Mr Melhopt said.

However, that would be up to the new chairman or chairwoman of the board, who would be chosen at the same meeting, he said.