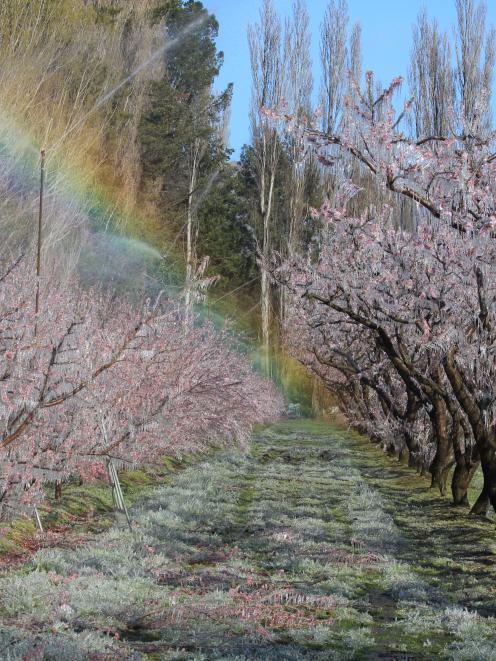 Frost fighting on an Earnscleugh nectarine block. Photo by John Douglas.
A succession of frosty nights in Central Otago has done more than interrupt the sleep patterns of orchardists.

Frost fighting has left some orchards waterlogged, putting trees at risk of root rot or suffocation.

While frost fighting is common at this time of year, orchardists say it is uncommon to have so many nights of frosts in a row.

In the Teviot Valley, some orchardists have had to frost fight for five consecutive nights. In the Alexandra basin, it has been six nights, but Cromwell orchardists have escaped rather lightly, with only two or three nights.

Earnscleugh's Summerfruit Orchards general manager Ian Nicholls said this had been the second six-night stretch of frost fighting in the past three weeks and the ground was still boggy going into the second stretch.

Summerfruit New Zealand chairman and Roxburgh orchardist Gary Bennetts said tree health was at risk with so much water lying around.

''It can get around the roots and cause a bit of root rot and if it gets into the ground it can actually suffocate the tree,'' Mr Bennetts said.

''But at least we can frost fight ... We're not still using the diesel pots.''

Fruit trees broke into blossom earlier than usual this year and at the time, growers warned that meant the trees would be more susceptible to frosts.

Mr Bennetts said blossom had been affected but it would depend on what stage the flowering was at as to how it was affected.

In some cases, water used in frost fighting could wash pollen from the flowers and in other cases, where fruit set was beginning, it could delay or stop the set.

''We have got to be optimistic and I can't say what the end result will be ... It [the season] can all turn to custard in one day with [a significant amount of] rain.''

There was no frost fighting on Wednesday night but yesterday was cool and overcast meaning there was not much chance of the ground drying out.

Growers are beginning to see fruit set on apricots. Nectarines were still a week or two away and cherries would be after that, Mr Bennetts said.