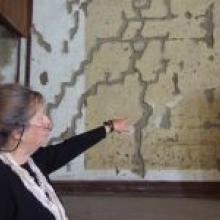 St Bathans resident Sharon Hinds with part of the hall due to be restored. Photo by Diane Brown
The 116-year-old St Bathans Hall is having a $12,752 render applied to its mudbrick exterior this week, in a restoration effort aimed at making it as close to its original condition as possible.

Euan Baxter Blocklaying, of Fruitlands, will undertake the rendering from today.

The Department of Conservation started restorative work on the hall in April last year. It had carried out mostly interior work to date.

Doc's Central Otago area manager Mike Tubbs said the Crown-owned historic reserve property would be open for viewing by the public, and could also accommodate several small-scale community events, once restoration was complete.

Mr Tubbs said Doc was negotiating with the St Bathans Community Association about how the hall could be used and managed in the future.

The $198,000 restoration project was about two-thirds finished, with plastering, exterior rendering, interior painting or lime washing, and toilet upgrading still to do.

‘‘Optimistically we would like to have it all completed at the end of May,'' he said.

The New Zealand Historic Places Trust approved the restorative work, after which the government provided funding for the project, which was being carried out with help from conservation architect Guy Williams.

‘‘It is not an enhancement. It is, as near as it's possible to achieve, a replica of the render that would have been applied when the hall was first finished in the early 1890s,'' Mr Tubbs said.