Proposed traveller accommodation along the Otago Central Rail Trail at Lauder is concerning residents, as well as national, regional, and district-wide organisations.

Christchurch developer David Judge applied to the Central Otago District Council for consent to establish 11 units, with a combined capacity for 44 people, between State Highway 85 and the rail trail, on 4.2ha of rural property.

Lauderburn Cottages would be visible from the rail trail as well as SH85, breach the skyline when viewed from certain areas, be built on flood-prone land, and have limited access to potable water.

Of the 16 groups, individuals, and organisations which submitted on the application, 13 were opposed and asked the council to decline consent or impose strict conditions.

Some submitters were concerned parts of the site, previously used by the Ministry of Works as an irrigation race maintenance depot, could be contaminated with hazardous chemicals.

Others were worried about the safety of visitors using SH85 between the units and Lauder businesses, increased traffic along the highway, and the supply of drinking water.

Many said the units would not be in keeping with the barely-developed, vast, rural nature of surrounding land.

A negative precedent would be established if consent was granted, allowing further development of accommodation visible to the trail and main road, some submitters said.

CODC planning consultant David Whitney recommended consent for the proposal be declined, although at a hearing for the application in Alexandra last Tuesday the scale of development was reduced to mitigate some submitters' concerns.

Speaking on behalf of the applicant, planning consultant Peter Dymock said only seven units would be built, and other changes made to the application to address specific concerns of the NZTA, Doc, and NZFS.

A boundary of 50m from the rail trail was proposed, vehicle access from SH85 to the site and parallel to the trail closed, and planting proposed to screen the units from SH85. Contamination tests would also be carried out on soil and remedial work completed if necessary.

Mr Dymock said some of the submitters owned or operated traveller accommodation in and around Lauder, and the "real motivation" behind their submissions could be questioned.

The council's hearings panel reserved its decision, which should be released within 15 working days. 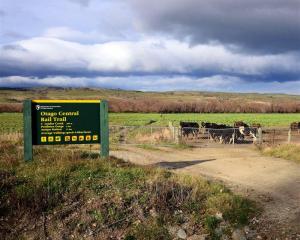