Sections will be discussed 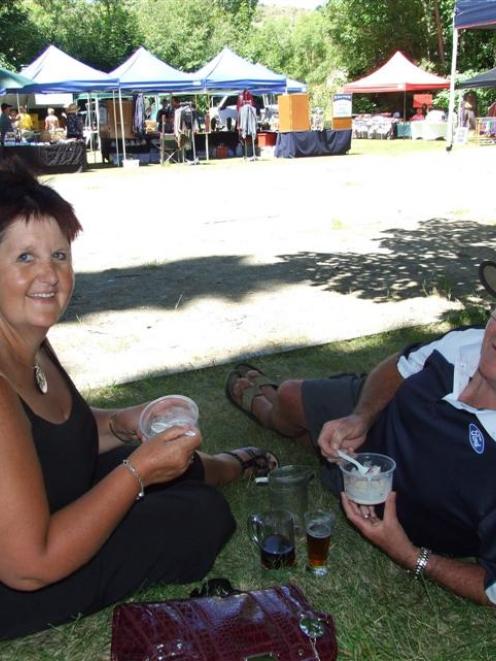 Robyn and Russell Gilchrist, of Dunedin, enjoy ice cream and strawberries at the St Bathans village fete in early January. The fete is held on the old tennis courts in the centre of the village, which the Central Otago District Council has recently advertised as abandoned land. Photo by Lynda Van Kempen.
The fate of four sections in the centre of St Bathans which the Central Otago District Council planned to have declared "abandoned land" will be determined next week.

Two of the sections, opposite the Vulcan Hotel, contain old tennis courts and are used for the annual fete and other gatherings in the village.

Those sections and another on the same side of the street were originally owned by the St Bathans tennis club.

The council has received three requests to have those properties vested as a reserve.

The remaining section, on the opposite side of the street, next to the old post office building, was originally owned by Kildare Consolidated Gold Mining Company Ltd, a company struck off the Companies Office register more than 50 years ago. The 1012sq m section has a 2010 rating valuation of $90,000.

Council property officer Brian Taylor said the process to have land declared abandoned was a long one. If rates had not been paid on a property for three years and if the council could not find the owner of the land, it could make an application to the district court to declare the land abandoned.

"Obviously, we have to do some groundwork first and pull out all the stops to try and elicit any information about the property or anyone that might have a claim on it. The whole process can take up to three years."

The rates owing on the empty sections were irrelevant, he said. The owners listed on the council records had probably died and there was no information on who might have inherited the properties.

If the properties were declared abandoned and later sold, any rates arrears would be taken from the proceeds, with the remainder going to the Public Trust.

In his report to the Vincent Community Board, which will consider the matter at its meeting on Monday, Mr Taylor said it was rare to have properties come on the market in St Bathans.

The council had four responses after advertising its plan to declare the land abandoned.

Paddy Enright, of Oturehua, said his father was the chairman when the tennis club took over the land in 1918. The club used the courts until about 1960 and he asked for the land to be retained as a reserve.

"There is no alternative site in St Bathans. There are many public gatherings held on the old tennis courts - picnics, sports events, fetes, etc."

The secretary of the St Bathans Community Association, Angela Middleton, and the Central Otago manager of the Department of Conservation, Mike Tubbs, have also asked for those sections to be kept as a reserve.

A descendant of one of the tennis club trustees who was listed as a section owner has also contacted the council.