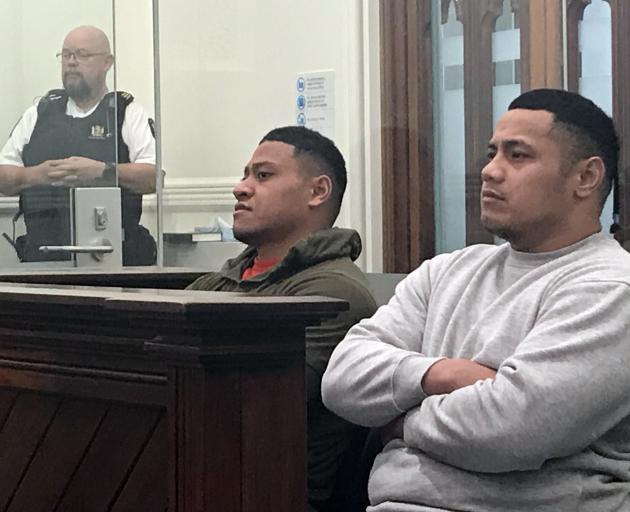 Tamiela Siale (L) and Suliasi Fangatua were sentenced to prison after the attack of a woman in Cromwell last year. Photo: Daisy Hudson
A woman who was dragged down a gravel path and sexually violated on the shores of Lake Dunstan will live with the memories of her ordeal for the rest of her life, a court has heard.

The two orchard workers who attacked her, Suliasi Fangatua (30) and Tamiela Siale (23), were sent to prison when they appeared for sentencing in the Dunedin District Court this morning.

They had pleaded guilty in January to charges of abduction and sexual violation by unlawful sexual connection.

The court heard how the pair, both from Tonga, turned up to Cromwell’s Victoria Arms Hotel early on February 3, 2019.

The victim, a 35-year-old woman, could be seen talking to Siale outside the establishment.

Moments later, she was captured walking across the road to a car park with two men, who told her she could get a ride home.

They then dragged her over a grass bank and down a gravel path towards the lake.

Siale and Fangatua restrained her, one grabbing her upper body, the other her lower half.

Fangatua positioned himself by her head and put his hand over the victim’s mouth to stop her from calling for help.

Siale violated the woman, who was crying and at times could not breathe.

She thought she would die, the court heard.

Fangatua only removed his hand from her mouth so he could kiss her.

The men spoke to each other in Tongan and laughed during the attack.

The victim’s shoes were found in the car park, her jeans in some bushes, togs on a gravel path closer to the lake and her handbag had been thrown into the lake.

Afterwards, Siale gave his hoodie to the victim after she said she was cold.

He would later say he did not know how his DNA, and Fangatua’s, ended up on the sweatshirt.

The victim bolted back up the path, made it back to the hotel and managed to rouse the publican.

The pair initially denied their offending, but later pleaded guilty.

She had multiple abrasions and bruises on her body after the attack.

Both men wrote letters expressing their remorse, but Craig Power, who appeared for the Crown argued they were "too little, too late".

A letter from a church minister said Siale could not have committed the sexual offending.

Siale’s lawyer said that was because the minister struggled to reconcile Siale’s Christian upbringing with the offending.

Judge Kevin Phillips questioned the pair’s remorse, saying they both denied their actions to a probation officer.

Fangatua’s lawyer said his client was ‘‘deeply ashamed’’ by his actions, and for letting his family down.

Judge Phillips sentenced Fangatua to five years and eight months, and Siale to four years and nine months in prison.