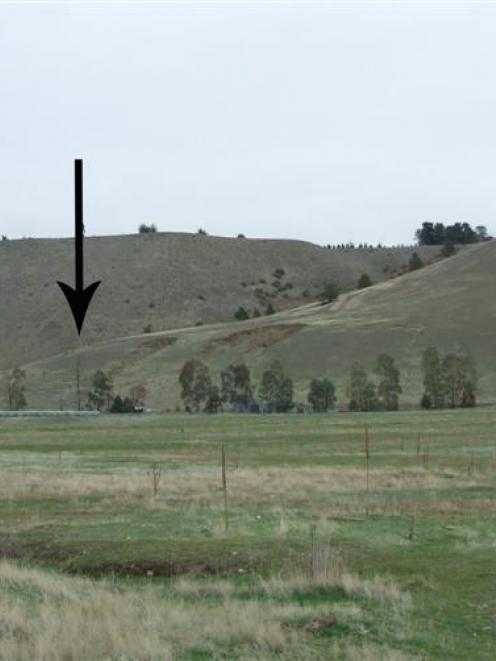 The Central Otago District Council has applied to itself to locate a water reservoir on the lower slopes of the Sugarloaf's northern end (site arrowed). Photo by Lynda Van Kempen.
Opponents of the Central Otago District Council's plans to locate a 2-million-litre water reservoir on the Sugarloaf hill, near Cromwell, say the council is breaching its own planning rules and spoiling an admired landscape.

The council has applied to itself for consent to establish a water supply reservoir on the lower slopes of the Sugarloaf's northern end.

He reserved his decision.

The reservoir would be a circular concrete tank, 22.5m in diameter and 5.5m high, some of it partly buried.

It would be painted olive-brown and located west of the intersection of Clark Rd and State Highway 6, opposite the Pisa Moorings residential subdivision.

Seven submissions were received, five of which initially opposed the council's plans.

Two submissions, from the Pisa Moorings Utility Society and the Pisa District Planning Group, were neutral.

The New Zealand Historic Places Trust initially opposed the application because of concerns the site was next to historic gold mining tailings.

The trust withdrew its opposition after the parties involved entered into a heritage covenant to protect and manage the archaeological site.

Downer EDi Works Ltd, which owns land to the north of the Pisa Moorings subdivision, also withdrew its initial objection.

The council's utilities services manager, Peter Greenwood, said the reservoir was to cater for the growth of the area.

Lowburn and Pisa were vulnerable to a pipe failure, so it was sensible to have some storage of water in the area.

Completely burying the reservoir would present an engineering challenge and would also increase the cost of the facility, Mr Greenwood said.

Appearing for the council, surveyor Peter Dymock said screening the reservoir with plantings was inappropriate "as the whole ethos of the Sugarloaf is its barrenness.

To plant things would be incongruous".

Objector Mrs Lyon said it was a contradiction that planting was inappropriate but a man-made structure was not.

"You are saying trees are incongruous but a reservoir isn't.

"So you can't plant trees but you can plant a dirty great reservoir," she said.

Mr Perriam said the area already had a safe, potable and reliable water supply and the reservoir was unnecessary.

It would also have an adverse effect on the landscape.

"It is intrusive on all of what Sugarloaf's iconic shape stands for and [the Sugarloaf] has been preserved in the current district plan as an outstanding landscape."

Mr Paterson said the council was breaking its own rules and seemed to have entered into "a tangled web of backroom deals" so it could proceed with its plans.

The council's planning consultant, David Whitney, recommended the application be granted, subject to more than 20 conditions.