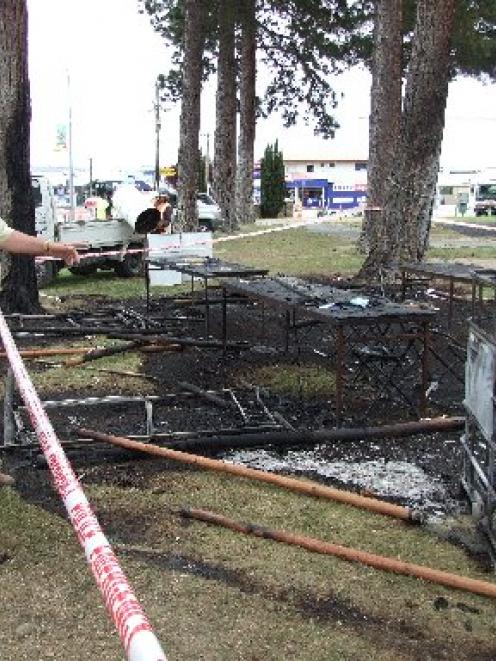 Alexandra Thyme Festival co-ordinator Kathi McLean and Central Otago Enviroschools co-ordinator Steve Brown survey the remains of the new Enviroschools tent which was in Pioneer Park, Alexandra, this week as part of the festival activities. The tent was razed by a fire early on Wednesday morning. Police are treating the fire as suspicious. Photo by Lynda Van Kempen.
Security has been increased after a suspected arson attack early yesterday destroyed a new Enviroschools tent, which had housed some of the Alexandra Thyme Festival activities, in Pioneer Park.

Police are investigating the fire that destroyed the eight by four-metre canvas tent plus the displays and furniture inside, as well as badly scorching a Wellingtonia tree.

Sergeant Ian Kerrisk, of Alexandra, said police would like to hear from anyone with information about the fire.

Some people had coincidentally been seen running away from the area.

The tent was purchased just a few days before the festival began last Saturday.

"It's really disappointing, especially when it's all community-funded, but I suppose there's always people in a community who will go and do something stupid," festival co-ordinator Kathi McLean said.

"We don't want it to dampen our enthusiasm for this festival. It's been such a good week and every workshop and course has been fully booked."

She said the blackened tent site would still be educational.

"It will teach them [children] about the destructive force of fire and the impact it has on our environment," she said.

Security guards had been employed to patrol the site, and that service would be stepped up, she said.

Station officer Brendon Walker said it was fortunate there was only a light wind when the fire started and that mature trees near the tent had been pruned high.

"When we got there, the fire was just starting to singe some of the trees in the park and the Contact tent nearby was starting to melt from the heat."

The blaze was quickly brought under control, he said.

Enviroschools is a programme for schools working towards sustainability.

Enviroschools Central Otago co-ordinator Steve Brown said there were display boards in the tent, along with scrapbooks that recorded the local schools' involvement in the programme.

A different Enviroschool used the tent every day this week and fortunately they took home their work at the end of the day, he said.

Central Otago District Council parks and reserves manager Grahame Smail said although he was not a tree expert, he believed the Wellingtonia tree would survive.