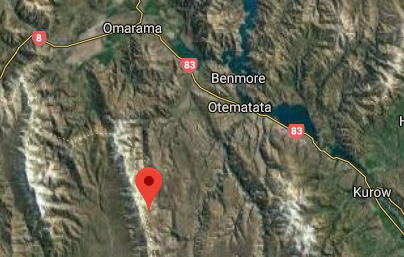 Photo: Google Maps
A heavy landing by a helicopter resulted in two people being rescued off Central Otago’s Hawkdun Range.

The pair were not injured after the Hughes 269 helicopter rolled during an emergency landing.

A Civil Aviation Authority spokesman said it was notified of the incident on Monday evening.

‘‘The pilot encountered an area of downdraught and elected to land the helicopter.

‘‘In the process, the helicopter struck some tussock and rolled over.

‘‘There were no injuries to the pilot or passenger.’’

He said as the pair had no cellphone coverage they climbed a hill where an Otago Rescue Helicopter picked them up.

‘‘The CAA has interviewed the pilot and the aircraft will be removed by the insurance company.’’

A Maritime New Zealand spokesman said it received a beacon alert at 1.40pm and sent the rescue helicopter to the location of the beacon.

The rescue helicopter found the aircraft crashed on a hillside.

The two occupants were standing nearby, uninjured, and were flown to a local homestead at 2.20pm, he said.

The Transport Accident Investigation Commission said it would not be investigating the incident.