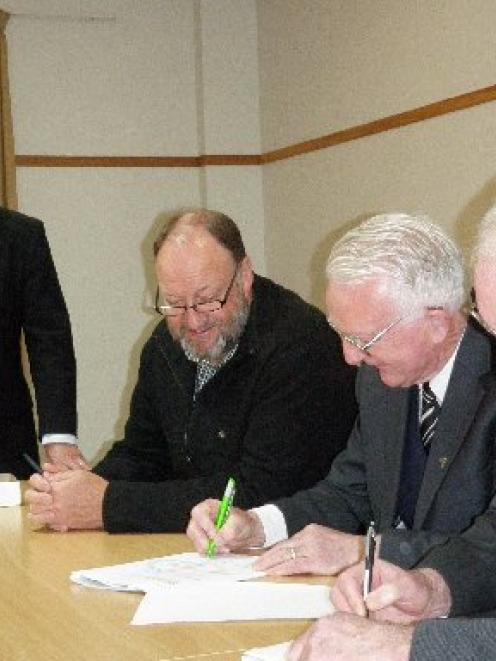 But plans to sign the agreement at Lake Ruataniwha - the boundary between the Waitaki and Mackenzie District Council through which the 314km trail from Aoraki-Mt Cook to Oamaru will pass - were thwarted by the weather.

Snow and freezing temperatures forced the signing indoors to the Twizel Events Centre.

A joint venture between the two district councils, the Mackenzie Tourism and Development Trust and the New Zealand Cycle Trail project, it is being promoted as a major tourist attraction with the potential to significantly boost the economies of the townships it passes through.

"It is our longest trail.

"It is downhill and riders will be helped along by the prevailing northwesterly winds," Mr Dunn said.

MacKenzie Mayor John O'Neill said he had been very impressed with the planning for the Alps 2 Ocean cycle trail so far.

The trail offered a diverse range of scenery that could not be duplicated anywhere else in the world.

Individuals and towns along the trail, such as Twizel, had a unique opportunity to expand and develop tourism opportunities, Mr O'Neill said.

Waitaki council chief executive Michael Ross said the trail was a fantastic opportunity for the community.

"It is a real boost to see the hard work paying off as the project progresses.

"We are very proud of what is on offer in our district. This is another opportunity to show off our natural beauty, Victorian heritage and unique charm," Mr Ross said.

"The trail route is outstanding. You will be able to see scenery that it would take you months to see in Europe in a week but without all the traffic, cathedrals and museums," Mr Brownie said.

Trust chairman Mike Neilson said the establishment of the Mount Cook Motor Car Service by Rodolph Wigley more than 100 years ago had an impact on the Mackenzie and Waitaki districts' tourist industries and economies unrivalled until now.

Alps 2 Ocean would be equally significant in the districts' development, he said.

Starting at Aoraki-Mt Cook, the trail descends 780m through the Mackenzie Basin to Oamaru.

Along the trail, cyclists will pass Lakes Pukaki, Ruataniwha, Ohau, Benmore, Waitaki and Aviemore and the towns of Twizel, Omarama, Otematata, Kurow, Duntroon, Ngapara and Tokorahi..

The next 17km follows the Fossil Trail and the final 39km to Oamaru uses a disused railway line and quiet country roads.