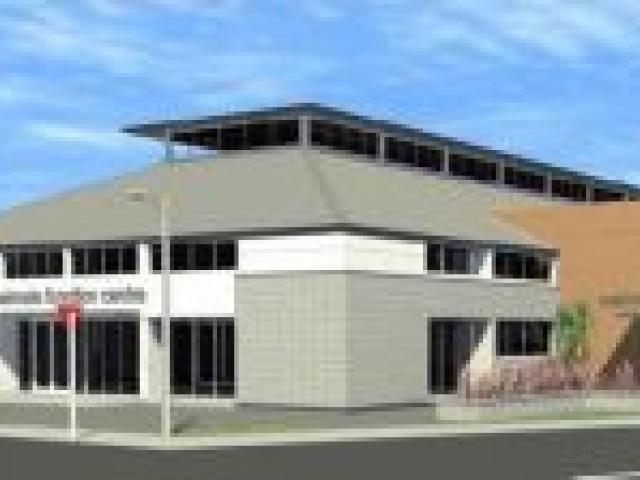 A concept of the redeveloped stadium by architect Forgie Hollows and Associates. Image by Waimate District Council.
A Waimate district councillor has suddenly resigned, frustrated by what he sees as a lack of accountability in some areas, and believing he can achieve more outside the council than inside.

Stuart Thomson, who was in his first term, resigned on February 5, just two days after a council meeting at which he and other councillors were given a very short time in a public-excluded meeting to read and approve a contract for Waimate's new stadium.

That was the last straw for Mr Thomson, the Pareora-Otaio-Makikihi ward councillor.

His resignation was made public yesterday, when Waimate Mayor Craig Rowley called for nominations for a by-election for the seat. Nominations close on February 16 and postal voting closes on May 12.

Mr Rowley referred any inquiries about the reasons for Mr Thomson's resignation to Mr Thomson.

Yesterday, Mr Thomson told the Otago Daily Times, when contacted, that the ''council is run principally by a few people in Waimate''.

The council found it difficult to do the simplest of tasks, quoting bureaucracy and policy as the reason.

''The interest in the rural sector is virtually zero. There is every excuse not to do anything for [rural] roading, but the smallest of projects in town, they seem to find the money.''

Mr Thomson used building of the new Waimate stadium, expected to start later this year, as an example.

The council had promised ratepayers would not contribute any more than $3.8 million, but was proposing a loan which, at an average rate of 7% over 40 years, would end up costing $11.3 million.

The council had also made it a condition the community had to raise $950,000 towards the stadium, but last week decided to underwrite any shortfall.

No detailed figures were available on the cost of running the stadium and actual numbers of users, apart from references to clubs and organisations.

To top that off, councillors were presented with a contract during a meeting last week, where the public was excluded, and were expected to approve it ''in 10 minutes'' - although Mr Thomson said it was probably more than that - so it could be signed promptly.

He voted against it, but emphasised he was not against the stadium.

''As a former businessman, I wouldn't sign any millions-of-dollars contract after reading it for only 10 minutes,'' he said.

Mr Thomson believed he could not achieve any more by being a councillor, particularly when he was gagged against revealing facts because of public-excluded meetings.

He felt he could achieve more outside the council, where he could comment openly.