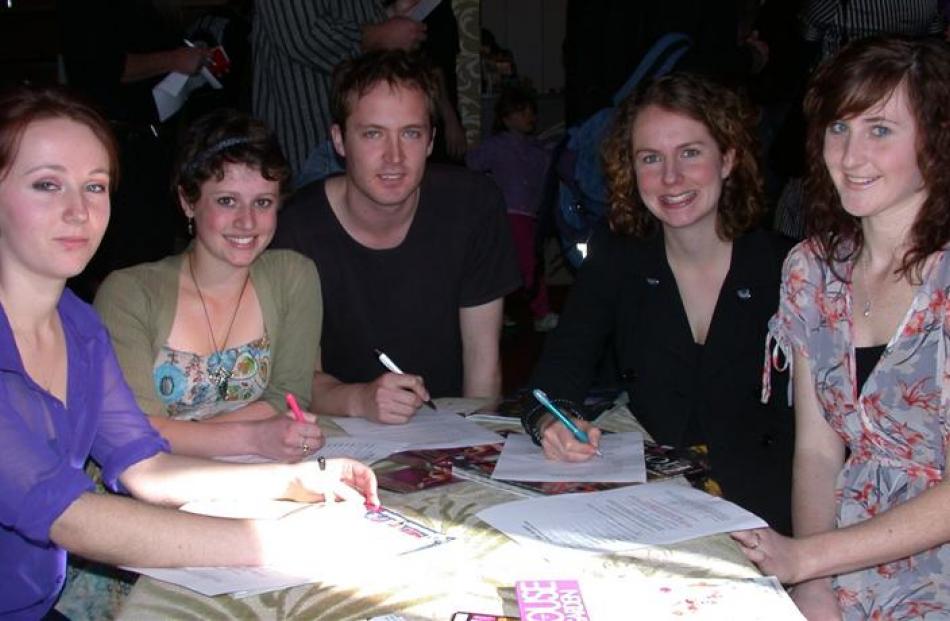 Trying out for extras for 'The Hobbit' at a casting call in Oamaru yesterday were (from left) Julia Ludbrook, Rhiannon McNish, Simon Davies, Kate Ombler and Claudia Nimmo who travelled from Christchurch. Photo by David Bruce.

Hundreds of people of all ages, shapes and sizes came to Oamaru yesterday in a bid to be part of The Hobbit movie being filmed by Peter Jackson.

The casting call was set down for three hours at the Opera House starting at 10am, but hopefuls were filling out forms and queued up well before then.

By 10.30am, about 100 people were waiting to go through the process to be one of about 200 extras needed for filming scenes in the Twizel-Lake Pukaki area during November and December.

People were still trying out past the scheduled finish at 1pm.

Included in the queue were five young people who had come from Christchurch, leaving at 6.45am. Even the advent of daylight saving yesterday did not derail their plans - they were all on time.

Julia Ludbrook, Rhiannon McNish, Simon Davies, Kate Ombler and Claudia Nimmo are all Hobbit fans, although Rhiannon was described as being "crazy about Lord of the Rings".

Aged 19 and 20, they were trying out for elves, the requirement being 17 to 35 years old and at least 168cm tall, although they were quite prepared to be anything, just to be part of the film.

Having heard there would be a casting call, they kept watch on internet sites for the venue and time.

Others had come from as far as Dunedin and Timaru.

The casting call was also for "towns people" - men and women aged 30 to 80 years with character faces and men with beards. All shapes, sizes and ethnicities were welcome.

That brought out some real characters, especially men of all shapes, sizes and colours of beards, some unkempt through to others plaited and trimmed. Some women dressed in Victorian clothes to enhance their chances of being selected.

Groups of four were directed to the first-floor landing where their heights were measured, photographs taken and questions asked.

Applicants were told not to talk to the media about the casting call or if they had been selected.

Before going in front of the camera, each had to fill out an application form, which emphasised it was "not confirmation of work".

They were asked such things as whether they could work with 12 hours notification during November and December, any skills they might have, and their height, dress or suit size.

They were warned the work was intermittent and often last-minute, work days were "long, changeable" and "patience and flexibility" was essential.

Applicants also had to be eligible to work in New Zealand.

Casting calls were also held in Wanaka on Friday, and Twizel and Tekapo on Saturday.