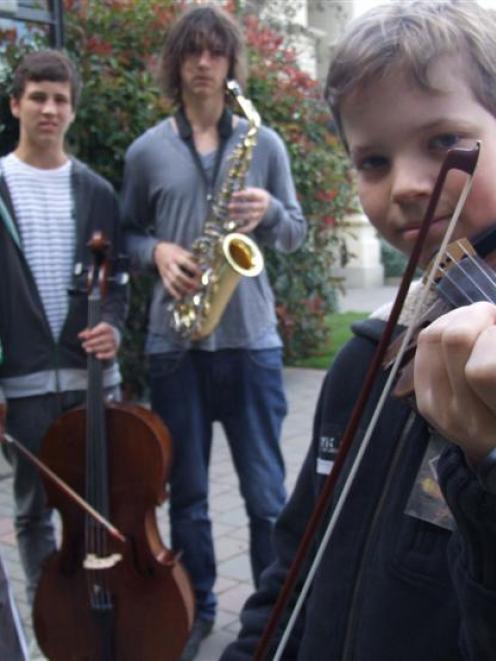 Nick Majic (13) plays his violin at Waitaki Boys' High School yesterday, watched by his brothers Doug (11), Rob (14) and Matt (16). Photo by Sally Rae.
The Majic family of Wellington is having a magic time at the Waitaki summer music camp in Oamaru this week.

Brothers Matt, who plays saxophone and drums, Rob, who plays cello, Nick, who plays violin, and Doug, who plays trumpet, are attending the camp at Waitaki Boys' High School for the first time.

Their mother, Helen Majic, has been so inspired by the camp she has bought a clarinet and started learning to play it.

"I've just played the [Dvorak's] New World Symphony in my room," she enthused.

Mrs Majic, who plays the piano, now wants to participate in next year's camp "because it's so exciting".

For Nick Majic, it was the first time playing in a full orchestra and he was having fun. He was also enjoying learning about different composers.

The 15th annual camp has attracted 62 participants from Auckland to Invercargill. The culmination is a public concert in the school's auditorium tomorrow at 7.30pm.

Among the music being played will be Dvorak's New World Symphony and Douglas Lilburn's Aotearoa Overture. That was particularly special as Lilburn attended Waitaki Boys' in the 1930s.

Camp participants will also be performing by the band rotunda in the Oamaru Public Gardens at 2pm today.