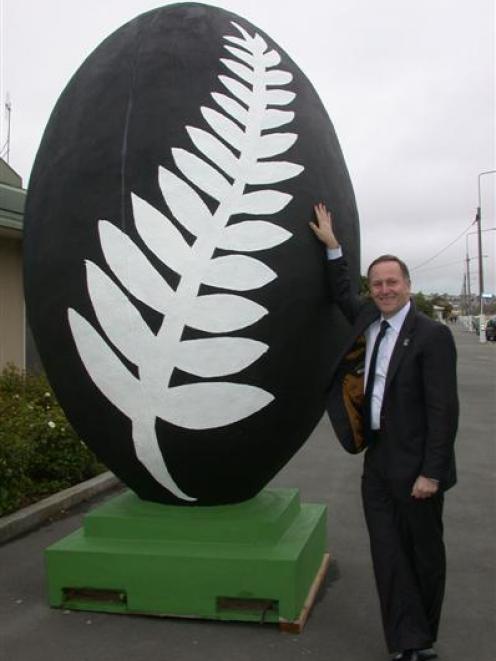 Admitting to a sweet tooth - chocolate fish rank among his favourites - he visited the Rainbow Confectionery plant and its 75 staff as his first stop, coming away with two bags of caramel chunks, a new product based on pineapple chunks launched about nine months ago and proving a hit.

In fact, he liked what he tasted so much, he offered: "I'll put my body on the line and be a taste-tester."

While rugby and the Rugby World Cup final was the major topic of conversation, outside it turned to soccer when he asked Corban Hodges (10) which sport he played.

Then, while heading into central Oamaru to visit businesses and a "walkabout", he spotted the giant concrete and plaster black rugby ball complete with silver fern outside Oamaru Veterinary Services, which took its maker Simon Laming about 40 hours to make.

Mr Key had to stop to have his photograph taken with it on his cellphone, which he told Mr Laming he intended to send to All Black captain Richie McCaw.

And, on the streets of Oamaru, Mr Key was treated almost like an All Black. Wherever he went, people wanted to speak to him or have their photographs taken with the Prime Minister.

He was happy to stop for all ages, making it hard for his minders to keep him on schedule.

While in PaperPlus, Mr Key was asked to autograph the latest Women's Weekly, which features a cover photo of him and wife Bronagh.

"It should be my wife signing - she takes a much better looking photo than me," he said.