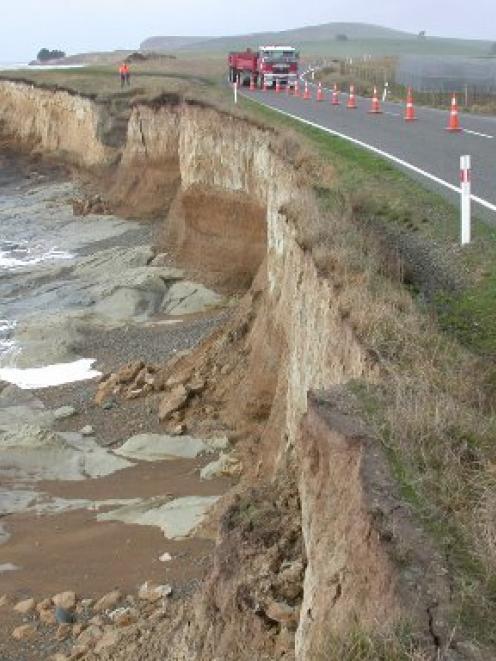 Coastal erosion attacks part of the Kakanui-Waiareka road. 2008 ODT file photo.
The Waitaki District Council was given a clear direction yesterday to keep open the coastal road from Oamaru through Kakanui to Waianakarua, by finding innovative solutions to stop erosion by the sea.

"The council has to have the will. If it doesn't have the will, we are wasting our time," Oamaru resident and operator of the Sea View Cafe at Kakanui, Deborah Souter, said.

The council heard from 17 out of about 100 submitters during a hearing on its draft coastal road strategy, which estimated it could cost ratepayers up to $6.5 million over the next 25 years to stop coastal erosion closing sections.

The most common reason for retaining the road was its scenic and tourism values.

Others were its use as a bypass-detour for State Highway 1, private property access and effects on businesses and Kakanui.

Solutions to the problem were also suggested, including using beach shingle and cement from Holcim NZ's new plant to build protection walls, utilising used tyres for groynes, wave electricity generators to break surges, turning the road into a cycle and walkway, getting central Government involved, preparing a national plan and getting advice from other countries which had solved the problem.

Kakanui resident John Chetwin said the draft strategy did not provide a sound basis for making decisions. It was an insult to the users of the road and coastal residents.

Old Bones Backpackers Lodge owners Wayne and Gloria Bason were shocked the council was suggesting Beach Rd, where their business was located, be closed when affected by erosion. If the lodge had to close or be relocated, they would need compensation.

Awamoa farmer Barrie Ray owns land along several kilometres of Beach Rd. He urged the council to explore all avenues to retain the road, as abandoning it was not "the New Zealand way to do things".

Waianakarua farmer Andrew Brown said protection work should not be paid solely by Waitaki ratepayers. The road was recognised as a tourist route and bypass when SH1 was closed, so the New Zealand Transport Authority and Government should contribute.

Kakanui resident John Robinson acknowledged the potential cost of keeping it open, but said simply saying it was unaffordable and letting it "fall down around our ears" was "a bit weak". The council had a duty to maintain it for future generations.

Former Waitaki mayor Alan McLay said the beach gravel was ideal for making concrete and Holcim NZ was proposing to build a new cement plant in North Otago. Utilising those two, the district could come up with technology to fix the problem.

Oamaru resident Bruce Comfort said the strategy was sensible and pragmatic, even if it was sad to acknowledge the inevitable loss of some of the road.