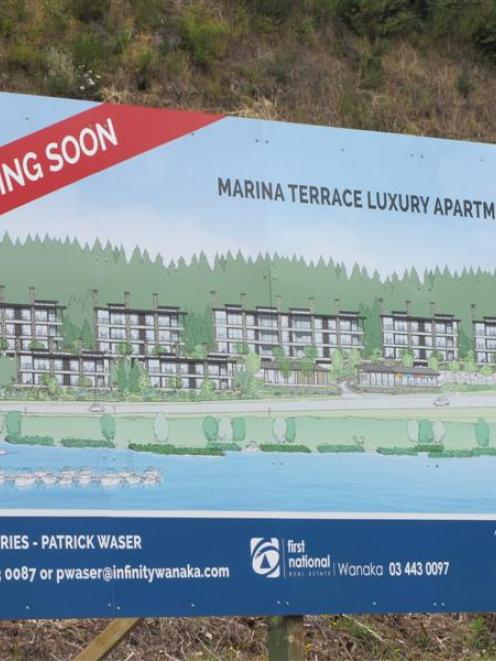 Development of the last undeveloped commercial lakefront land in Roys Bay, Wanaka, is set to go. Photo by Mark Price.
Plans have been revived for a multimillion-dollar development overlooking Roys Bay, Lake Wanaka.

Wanaka-based Infinity Investment Group is advertising a proposed complex of seven three-level buildings containing a total of 44 apartments on its Lakeside Dr site, opposite the Wanaka marina.

Managing director Bob Robertson yesterday described it as ''one of the most significant building developments in Wanaka for some time''.

''This is a substantial development in Wanaka's dress circle, on the best remaining piece of waterfront land in Wanaka.

The starting price for a three-bedroom, three-bathroom apartment with two-car garage is $995,000, and the top advertised price is $1.7 million for a penthouse.

The managed complex would include a cafe, bar, restaurant, swimming pool, spa and gym. Room service would be available.

The development is a much reduced version of Infinity's original plans for the site, which included a $100 million five-star hotel with more than 200 rooms, to be managed by Crowne Plaza.

Following an Environment Court appeal by neighbours concerned about the size of the development, the hotel was scaled back to a 77-apartment complex of 182 rooms.

Resource consent was granted in May 2008 but, six months later, Infinity dropped the idea because of the world financial crisis. It put the 13,764sq m site up for tender and turned its focus back to residential development.

Mr Robertson said yesterday the current market for apartments was ''strong'' and he did not consider an apartment with a price tag of $1 million or more to be overpriced for Wanaka.

He believed the apartments would sell ''quite quickly''.

Because the development was ''miles less'' than what was contained in the resource consent held for the site, he did not envisage any major planning issues.

He also expected the reduced scale of the development would mean fewer engineering issues to deal with the springs on the site.

The apartments are designed by Dunedin-based architects Mason & Wales, with timber and schist stone features.

Mr Robertson expected construction to start ''immediately after the first pre-sales are confirmed''.

A spokeswoman for the Queenstown Lakes District Council said yesterday it had not received a resource consent application for an apartment complex on the site.

''The only application we have received is for a temporary billboard sign and that is being processed at the moment.''