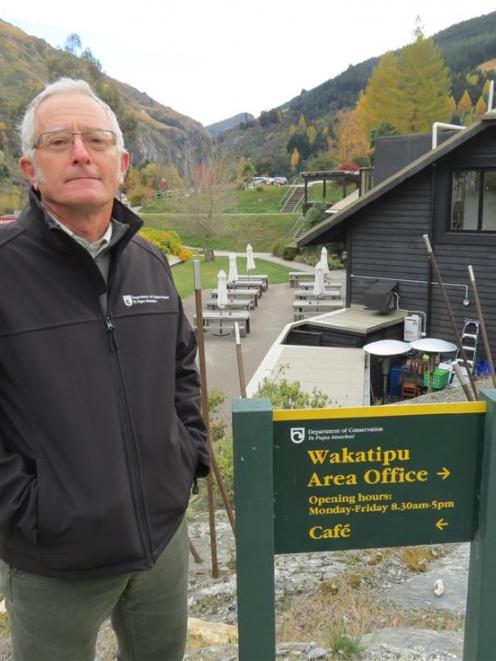 A full-time equivalent (FTE) ranger and an FTE business administrator have already been axed from the Doc Wakatipu area office and restructuring has left the future of the remaining 27 FTE staff hanging in the balance until May 31.

The office managed 20% of New Zealand's concessions, which underpinned the tourism and screen industries in the basin. It cultivated good working relationships with commercial operators and private landowners, while maintaining 399km of track and 37 huts, managing biodiversity threats, eradicating wilding pines and preserving heritage.

Outlined to all 1800 national staff earlier this month, the new structure to ''deliver conservation'' split area offices, including Wakatipu, down the middle and cut off the heads.

The previous structure involved 27 full-time equivalent positions in the Arthurs Point and Glenorchy offices. Among them were programme managers who reported to an area manager.

Doc Wakatipu area manager Greg Lind said the top two tiers would be disestablished, despite many of the most experienced staff working at those levels and having a passion for their specific area of expertise.

Public-private partnerships were already common with Doc Wakatipu, the latest example the finish this month of the first stage of the two-year $350,000 Air New Zealand-backed Routeburn Valley Restoration Plan with the installation of 38km of stoat traps.

Doc Wakatipu allied with the Queenstown Lakes District Council, Otago Regional Council, community groups and others in the Wakatipu Wilding Conifer Control Group to raise funds and tackle the 73,000ha of the basin infested with the introduced pest plant.

While restructuring might free up rangers from paperwork and allow for more hands-on conservation work, its success hinged on how well the two prongs integrated and co-operated.

''It's crucial this restructuring works and it's crucial for conservation,'' Mr Lind said.

''The organisation's strength is at its grassroots.''

Offices in Arthurs Point and Glenorchy were not at risk of closing, nor was the Doc Queenstown Visitor Centre on Shotover St.

The Government's blow to the 11 conservancy districts, to be merged into six new ''conservation delivery regions'', was softened by Conservation Minister Nick Smith sourcing an extra $20 million over four years for the department's budget, which saved the jobs of about 60 front-line staff nationally.

Vacancies had been created in the Wakatipu office where natural attrition occurred.

However, ''quite a number'' of the remaining 27 FTE staff would be affected and would be required to apply for new jobs, Mr Lind said.

Rangers would not have certainty of employment until the end of June, while the restructuring worked its way through the ranks, he said.

''The key issue for us is that Doc is a different organisation to most public service organisations.

''The people are genuinely passionate about the work, so the effect of this restructuring goes to the core of what these people do.''