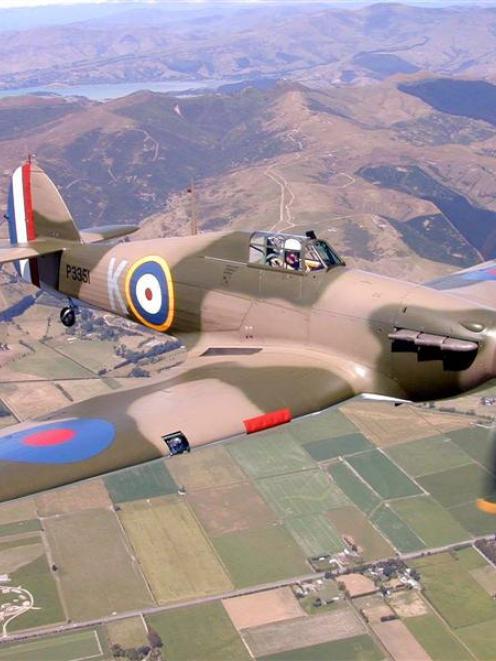 The plane, a feature of the Warbirds Over Wanaka International Airshow since 2000, was the last airworthy asset of the Alpine Fighter Collection established by Sir Tim Wallis.

Alpine Group chief executive Jonathan Wallis this week confirmed the plane's sale but declined to say who had bought it.

''It is very sad to see it go. However, it is great the aircraft will fly again. That is what it was built and designed to do.''

Mr Wallis would not say how much it sold for.

The Otago Daily Times reported in 2009 the Hurricane was being offered for sale by auction and was expected to fetch $4.9 million.

The Hurricane was built in 1940 and is one of just 11 still airworthy. It is believed to have been the only one in the southern hemisphere.

The wreckage of the plane was recovered from Siberia, where it was believed to have been shot down in 1943. Sir Tim acquired it in 1993 and had it restored.

Most of the restoration, aside from the engine and wings, was carried out in an Air New Zealand hangar in Christchurch.

Retired Air New Zealand engineer Mike Davies said while he did not work on it directly himself, he knew it had been a ''labour of love'' for those engineers who had.

Mr Davies said one of the problems of owning vintage aircraft was the cost of keeping them airworthy.

Parts were difficult to obtain and were expensive, and inspections were required at short intervals. He was personally sad to hear the plane would no longer be seen in New Zealand.

The Hurricane was the major drawcard for the 2000 Warbirds Over Wanaka airshow which was attended by 110,000 people over three days.

Over the years, the Wanaka-based fighter collection restored and flew an array of vintage aircraft, including five Polikarpov fighters, a Mark XVI Spitfire, a P-51D Mustang, a Kittyhawk, a Russian Yak 3, an American Corsair, and two Messerschmitt fighter-bombers.

The decision to sell the collection followed Sir Tim's serious Spitfire accident in 1996.

The Hurricane had been on the market for eight years, which Jonathan Wallis said was a reflection of the group's desire for the Hurricane to stay in New Zealand.

''Having exhausted all avenues for keeping P3351 in New Zealand, the aircraft has now been exported,'' he said.