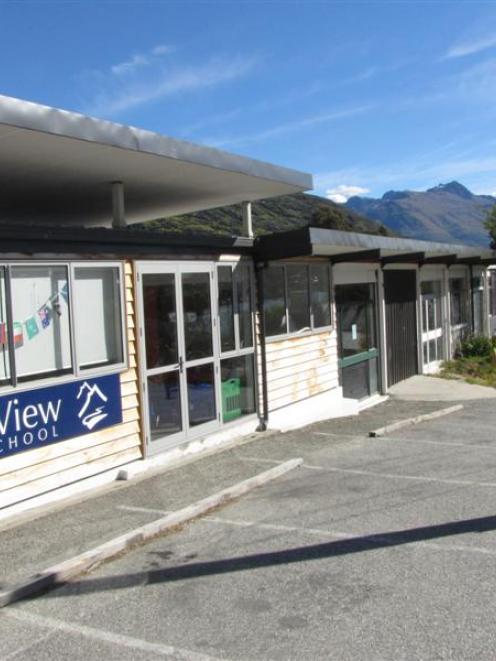 KingsView School. Photo by James Beech.
Annexing spare classrooms in KingsView School and setting up temporary classrooms on site are options being explored by the Ministry of Education to tackle the enrolment-zone crisis in Remarkables Primary School.

However, the school in Frankton, which was already forced by the ministry to reduce its enrolment zone on April 23 after just two and a-half years of operation, says it needs at least three extra classrooms and is "unanimously disappointed" with the options.

Ministry property advisers met the Remarkables board of trustees in private last week to discuss what temporary accommodation could be made available to cater for the growing in-zone roll.

The ministry said the $17.3 million Frankton school, which had a capacity of 460 pupils, needed to accommodate a further 60 pupils before the planned new Wakatipu primary school opened "in about two years' time".

The first involved using the two spare classrooms in the nearby KingsView School, and the other involved setting up temporary classrooms, which would be sound-proofed to comply with requirements of the Queenstown Lakes District Council because of the proximity of Queenstown Airport.

Remarkables board of trustees co-chairwoman Fiona Woodham, of Frankton, yesterday said trustees were "very surprised" the ministry had revealed what was discussed at the meeting, after asking the board to keep the options confidential.

"The board is unanimously disappointed with the solutions the Ministry of Education has offered. We've been talking to the ministry for the past 18 months about our concerns about roll growth, and the fact we identified even then that we were going to exceed capacity by the end of 2012 and definitely by the start of 2013."

The board had put forward several solutions, all of which were either rejected or ignored, Mrs Woodham said.

"The first that we heard about a ministry offer to establish two classrooms above the pub and next door to KingsView was last Thursday night. It came completely out of the blue."

The board was given until July 19 to respond to the ministry.

"We were working to that, so we feel this will come as a complete bombshell to our community and we feel they will be very unhappy with this proposed solution."

The Remarkables board understood no new primary school would open in the Wakatipu until term one in 2015, which was why the school was being asked to consider interim options.

However, "it was a very formative inquiry".

"They were looking at various options and thinking creatively outside the square, trying to provide capacity and what was best for the kids in the area."

KingsView had two unequipped classrooms, which could cater for 40 to 50 pupils.

The classrooms could be leased to Remarkables and so come under its administration.

The ministry had made inquiries to the board as to whether the classrooms were available.

The KingsView board would discuss the option when it met as normal next month, Mr van Ameyde said.

"If the ministry and the Remarkables board came to an agreement, I would suspect the classrooms could be ready for term one next year."