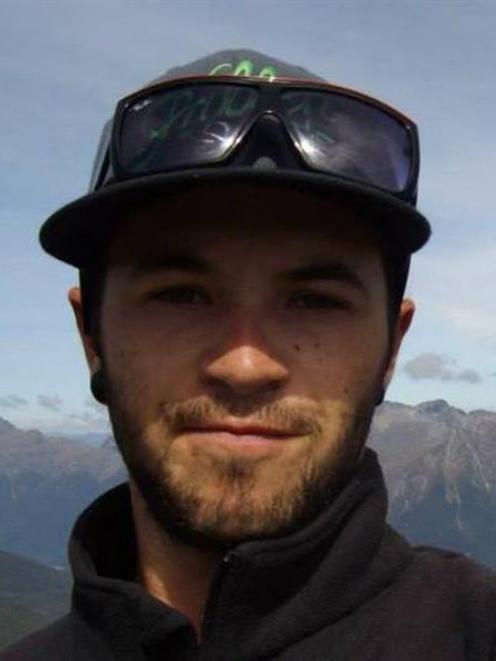 Rutger Telford Hale.
The mystery object which killed driver Rutger Telford Hale on State Highway 6 near Lake Hawea last year almost certainly came from an oncoming vehicle and caused the ''most unusual wound'' a pathologist had seen in 30 years of practice.

A coroner's inquest in Queenstown yesterday also heard evidence of an unidentified vehicle possibly returning to the scene of the fatality, raising more questions concerning what coroner Richard McElrea described as a ''classic freak accident''.

Mr Hale (22) died after being struck in the head by an object which crashed through the windscreen of his Subaru station wagon and exited through the rear window early on October 24, 2013.

The object has never been found, despite an extensive search.

Mr Hale's partner, Alaskan Danielle Oylear, of Hawea, who was a passenger in the car, attended the inquest, along with Mr Hale's mother, stepfather, sister and other supporters.

Ms Oylear told the court she recalled seeing approaching headlights before the accident and said the oncoming vehicle appeared to take the corner wide.

''I remember thinking there was something awful about it, like maybe there was a drunk driver. It didn't seem right.''

She paid particular attention to the vehicle because of the ''unusual'' driving and later described it to police as a newish, white, 4WD truck or utility vehicle, probably a single-cab model with high sides and no canopy.

As the vehicle passed, a beige-coloured object, about the size of a tissue box or brick, came ''rocketing towards us'' from somewhere between the driver's window and the back of the vehicle.

She covered her face briefly and heard a ''crunch, thump'' sound, before seeing Mr Hale slumped forward in his seat with his arms in his lap.

However, ''the only scenario that fits is an object coming off an approaching vehicle''.

Tyre marks on the road were consistent with another vehicle slowing and doing a U-turn at the scene, before continuing on its way, he said.

In his evidence, Detective Sergeant Brian Cameron said the marks were degraded, which meant taking a cast was not possible.

The accident was approached initially as a ''suspicious death'', but he was now satisfied it was not a deliberate act.

Something being thrown up from the road had been ruled out, because of a lack of supporting evidence, and he, too, believed the object had come from another vehicle and was man-made.

''Therefore, there is the responsibility on the driver of that other vehicle in relation to load security, if nothing else.''

Det Sgt Cameron said he was ''absolutely'' frustrated the case had not been resolved, despite exhaustive police inquiries.

About 400 man hours were spent searching for the object and owners of all white 4WD utility vehicles registered in the Central Lakes area since 2010 were spoken to.

In his evidence, Mr Hale's great-uncle Peter Phillips suggested police could have ''pushed a bit harder'' on one particular driver of a white utility vehicle who had come forward.

Det Sgt Cameron said the driver in question had admitted being in the area around the time of the accident but maintained they saw no other vehicles while driving to drop off building supplies in Lake Hawea.

The driver was adamant they had checked the tie-down canopy was secure before the trip and none of the items in the vehicle - work diaries, a mountain bike and dust masks - was missing.

The vehicle also varied from Ms Oylear's ''fairly generic'' description and its tyre tread was not consistent with the marks at the scene.

It had a likely length of more than 80mm.

Defence Technology Agency (DTA) investigator Ryan Brookes said he did not believe the item was made of steel, as it did not penetrate the windscreen at its first impact point.

The object could have been contaminated with stainless steel before or after the accident, for instance when emergency workers were cutting the roof off the car, he said.

Tools to cut the car were made of hardened steel, not stainless steel, though.

DTA was called into the investigation only last month, so had to rely on other people's descriptions and photos of the Subaru, which was disposed of some time ago.

The object had several points of impact inside the car and Mr Brookes was concerned material from just one site had been sampled.

US Army specialist advice suggested the object had a reasonably sharp corner and, while a lump of wood would not have been able to shatter the windscreen, it was ''definitely possible'' it could have been a brick.

Forensic pathologist Dr Martin Sage told the inquest the wound on the right side of Mr Hale's face and head was not consistent with a conventional rectangular brick.

It was semicircular in shape and 200 years ago could have been reasonably described as a cannonball injury.

''The temptation to think about metal spheres is quite strong, because of what we see.''

Dr Sage said in 30 years of practice, he had never seen such a wound. Nor had senior colleagues from New Zealand and Australia.

''It's an extremely unusual outcome and a very unusual wound,'' he said.

''It's got to be some sort of everyday object. It has to have had quite considerable momentum to be decelerated, as it's done damage to the head and still damaged the internal surfaces of the car, and exit through the back window.''

Senior Constable Chris Blackford said Mr Hale's death was ''not a closed book'' and police would vigorously reinvestigate the circumstances if new evidence came to light.