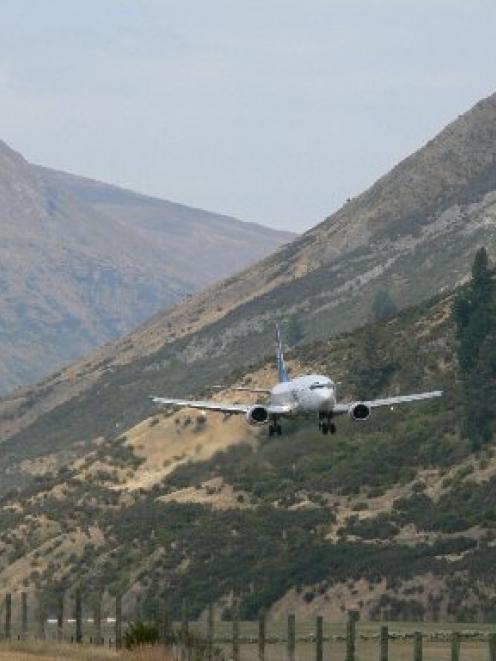 An Air NZ 737-300 approaches Queenstown. ODT file photo.
Air New Zealand will boost transtasman flights to Queenstown later this year, in an effort to promote the town as a summer destination for Australians.

"Some routes in particular are showing very positive signs, with Queenstown capacity up 88% over the same time a year ago."

Mr Thompson told the Otago Daily Times there was a perception in the market Queenstown was just a winter destination.

"However, this [increase in flights] is demand-driven."

In an effort to capitalise on greater interest in the resort, flights from Melbourne, Sydney and Brisbane would increase during the November 2010-March 2011 period, he said.

The airline would work with regional tourism organisation Destination Queenstown to market the town across the Tasman, Mr Thompson said.

"That is part of our commitment with them. We want to put bums on seats; they want to put [more people] in beds."

Destination Queenstown chief executive Tony Everitt said it "wonderful" to be the only destination singled out by the airline at the tourism conference, which was attended by more than 1200 delegates.

The extra flights over the summer period would build on what was expected to be a bumper winter, he said.