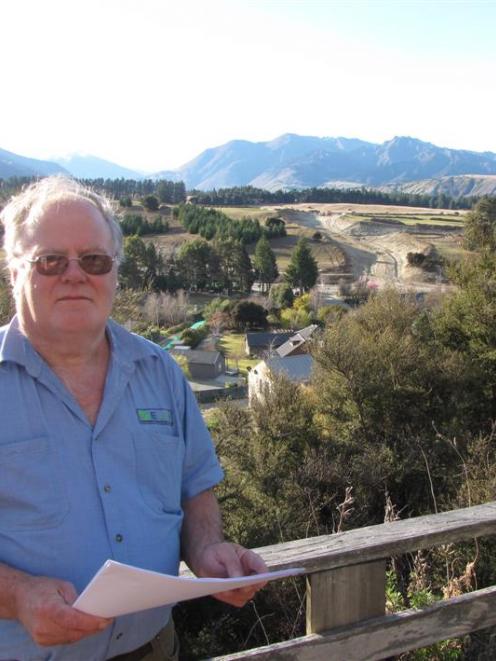 Neil Webster is one of a large number of residents living near Wanaka's proposed Plan Change 45: Northlake Zone who are opposed to the development. He inspected the area from a neighbour's Mt Iron property yesterday. An access road for the initial stage of the subdivision is visible. Photo by Lucy Ibbotson.
Wanaka residents living near the proposed 1600-lot Northlake subdivision are rallying against the development.

Private Plan Change 45: Northlake Zone, proposes rezoning 223ha of land north of Aubrey Rd from rural general and rural residential to a special zone, enabling a range of residential lot sizes with an average density of seven houses per hectare - a capacity of about 1600 dwellings.

The plan change was publicly notified at the start of this month. The submission period closes on Friday.

Neil Webster, who owns a property in Anderson Rd, has helped co-ordinate resident meetings encouraging submissions against the plan change and said many property owners in the area held grave concerns about its impact on traffic and noise levels, and the loss of amenity values.

The plan change was a ''landmark decision'' for Wanaka, yet many property-owners, particularly those based out of town, had ''not a clue'' what it entailed.

If the maximum possible development occurred, the housing would cater to almost double the existing permanent population of Wanaka, Mr Webster said.

''Most people I've spoken to were horrified when they found out what is actually involved in the plan change - the lot sizes and the extent of the subdivision.

''It really is like putting a big-city suburb in Wanaka and people are very upset about it ... It's just spoiling the whole environment around this area.''

Both men said expansion of the town was more appropriate on the south side of Wanaka, where long-planned developments such as Three Parks were under way.

''These guys are coming in and pushing the town the completely opposite direction that everyone's been working 20 to 30 years to do,'' Mr Webster said.

He considered the consultation period inadequate, too.

However, QLDC senior policy planner Alyson Hutton said it met the required timeframe for submissions on council or private plan changes, which was a minimum of 20 working days.

A hearing committee will be appointed by the council to assess the plan change and its submissions, before a decision is issued.

Michaela Ward Meehan, of Sydney, owns most of land subject to the plan change, and is working with four other landowners on the proposal.

Consented development at Northlake has already begun on 64 lots on 30ha, next to Aubrey Rd.