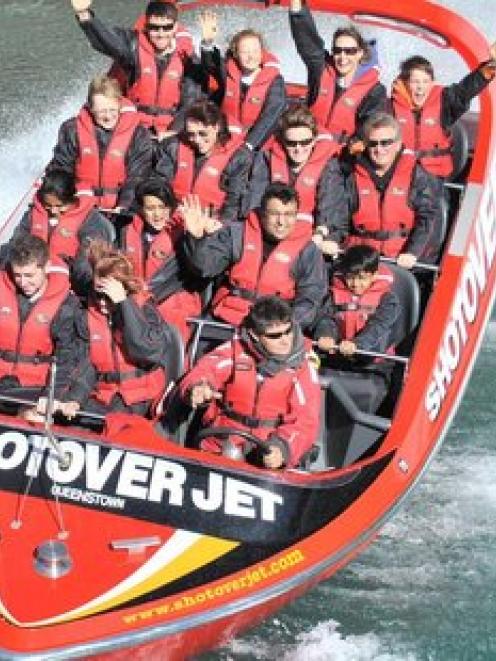 The royal couple will test their nerves with a ride on the Shotover Jet. Photo / APN
The Duke and Duchess of Cambridge will be just half a metre away from deadly rocks when they ride the adrenalin-fuelled Shotover Jet as part of their trip around the country.

The couple will be taken on the world-famous jet on the Shotover River on Sunday afternoon before heading to Amisfield Winery, where they will probably welcome a tipple after the breath-taking ride.

The jetboat ride, known for its on-the-edge excitement, takes goes through the Shotover River Canyons.

Regional general manager of Ngai Tahu tourism David Kennedy said there was a pool of two drivers, and whichever one was chosen to take the royal couple on the ride wouldn't be holding back because of their important passengers.

"(William and Catherine) have requested a normal Shotover Jetboat trip, which is always cautious but it's still the most exciting jetboat ride in the world."

The driver would not be holding back, just because he had the second in line to the throne on board, Mr Kennedy said.

"They'll be doing 360 degree spins and going within half a metre of the rocks."

He could not guarantee the couple would get a good drenching on the ride "but potentially there's always a bit of spray that comes into the boat".

The drivers were experienced and had each clocked up "thousands of hours" of driving on the water.

"They're pretty relaxed about the whole thing."

The company was "pretty excited" about their famous guests.

"We're expecting that there'll be some great international coverage - it's an iconic New Zealand product and a New Zealand invention, the jetboat."

There would be extra security deployed along the river and at the base, Mr Kennedy said.

The river would be closed to public for the afternoon.