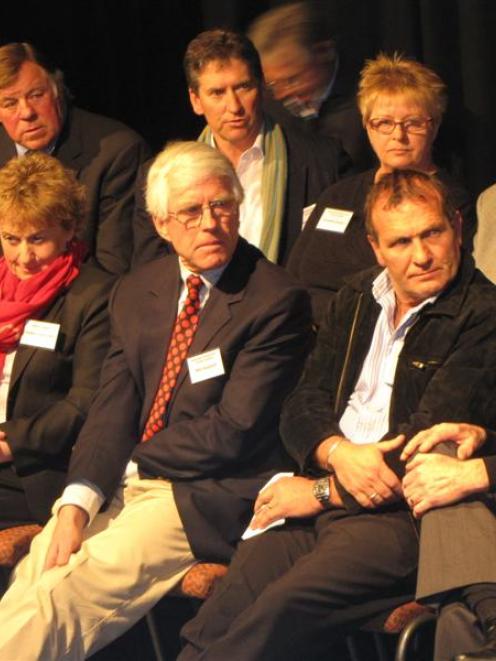 The meeting was organised by the Otago Daily Times in conjunction with the Queenstown Chamber of Commerce.

The chamber notified candidates of its intention to ask a two-part question relating to the controversial strategic alliance between the Queenstown Airport Corporation and Auckland International Airport Ltd: "Do you support the transaction and would you support the second stage of the transaction, selling more shares to AIA and giving AIA a seat on the QAC board?"

Following council-obtained legal advice, the chamber advised candidates to "make the point that you have an open mind on the issue" - and when answering the question, the open minds were abundant.

While some chose not to answer the question, others were more pointed in their open-mindedness.

Mayoral aspirant Michael Scott said while he was "open-minded", "the money is going ... towards our debt - it will help bring our debt down ... So far, we're doing the right thing."

The third mayoral candidate, Simon Hayes, said from what he knew he "categorically" did not support the transaction, "except I have got an open mind".

Wakatipu ward candidate Karen Swaine could not separate the transaction from the process which led to it, while fellow ward candidate Simon Stamers-Smith believed the QAC board did "bloody well" to get $27.7 million for selling less than 25% of a company which had never paid a dividend.

Most of us here think Auckland is the foreigner."

Jo Dippie (Wanaka ward) said it might well have been "the deal of the century", but "the secretive and furtive manner in which this deal was made will forever taint this [transaction]".

A statement from Cath Gilmour said "for the 16 reasons" she had stated in the ODT, "I do not support the transaction ... but I'm open to persuasion".

Wakatipu ward candidate Kevin Peterson also did not support the transaction, "but I still have an open mind".