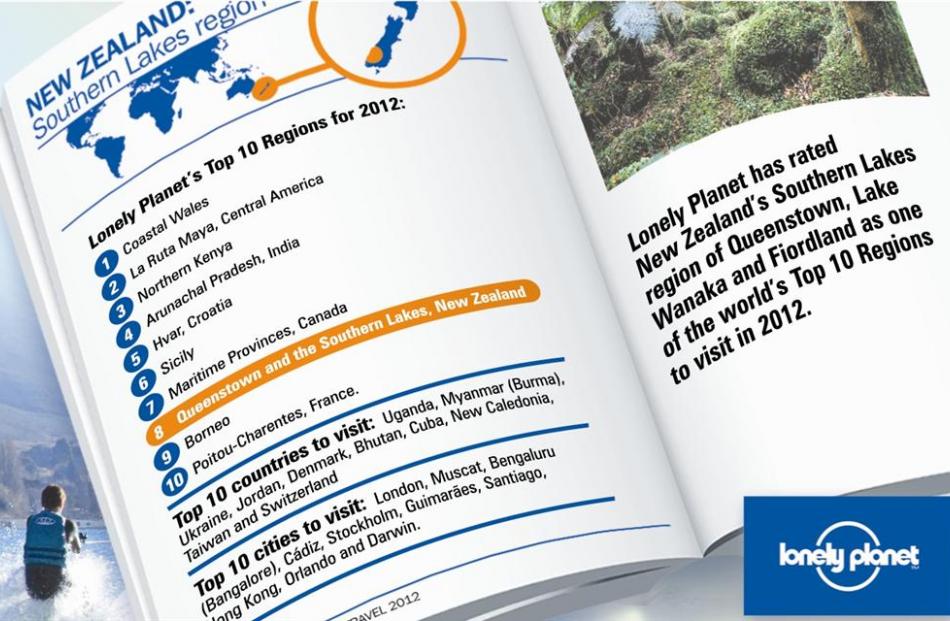 The Southern Lakes region - including Queenstown, Wanaka and Fiordland - has cracked the Lonely Planet's Top 10 Regions in its Best in Travel 2012, published today, the only New Zealand region to feature in the new book.

The seventh annual collection of best trends, destinations and experiences for the coming year sees "Queenstown and the Southern Lakes" listed at No 8, an achievement described as "priceless" by Destination Queenstown chief executive Tony Everitt.

"There isn't a bad time to turn up in the world's top adventure playground," Lonely Planet says.

"There's non-stop outdoor activities year-round in the resort towns of Queenstown, Wanaka and Te Anau, as well as the surrounding mountains, lakes and national parks.

"Where else can you ski in the morning and golf or water-ski in the afternoon? Add excellent wineries and superb restaurants and what more is there to say?"

"Words like 'breathtaking', 'jaw-dropping', 'exhilarating' and 'stunning' are grossly overused in the tourism industry, but the Southern Lakes region has a right to them all."

Mr Everitt said featuring in Best in Travel 2012 would bring "significant benefits" for the region's profile.

"To receive this kind of endorsement by Lonely Planet is priceless for Queenstown and the Southern Lakes as well as New Zealand."

Destination Fiordland manager Lisa Sadler said the power of Lonely Planet could not be underestimated. Lake Wanaka Tourism general manager James Helmore said the book communicated to a core audience what the region had to offer.

"With its diversity of activities, striking landforms and freedom to do your own thing in the ultimate alpine playground, Wanaka and the Southern Lakes is the perfect fit for the Lonely Planet reader."

Best in Travel's recommendations are drawn from hundreds of ideas submitted by Lonely Planet's staff, authors and community of travellers, bloggers and tweeters.