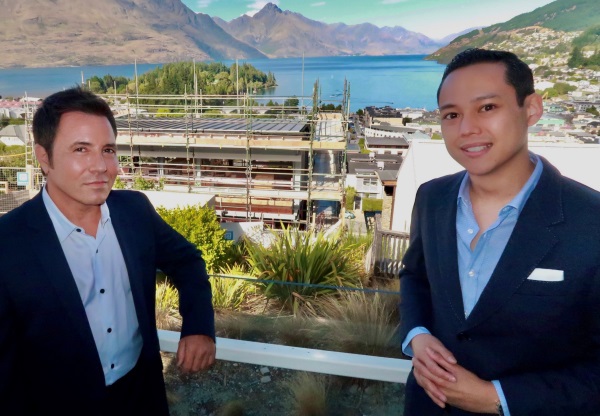 The Carlin developer Kevin Carlin (L) and managing partner Nick Liang overlooking a three-level building under way at the top of the site. Photo: Mountain Scene
February 19 was a red-letter day in the lead-up to Queenstown’s, and New Zealand’s, first six-star hotel opening for business.

The first of six roofs went on the central Queenstown boutique hotel that’s been renamed The Carlin, after its developer, Kevin Carlin.

The same day, its managing partner, Nick Liang, arrived from Hong Kong, after leading a team of 650-plus as manager of The Ritz-Carlton.

Liang’s already put his mark on his new property — its name was his idea.

"It brings a nice regal feel and sound to the city," he says.

Opening this December, at 43 Hallenstein St, the hotel will comprise nine generous-size suites that, with interconnecting rooms, will be able to sleep 50 guests.

Suites range from 50 to 288 square metres, including, for all but one, rooftop terraces with fireplaces, spas and outdoor dining.

The Kent St access "has allowed us to build the penthouse first — possibly the only building to ever have a roof on before you even have a ground-floor slab".

When the $3 million U-shaped retaining structure’s complete in a few weeks, another crew will start building up from Hallenstein St.

That will include ‘The Grand Room’ that will house the lobby, cocktail lounge and fine dining area.

Asked what will make it a six-star hotel, Carlin points to most suites having pools — swimming or spa — and a private entrance for the top floors from Kent St for VIPs.

"We have two lifts, one exclusively for the top three levels.

"You also must be able to have a chef come in the room and finish off the meal."

Carlin says the cost of the build, which he’s handling, will approach $20m.

‘‘When you’re trying to make a six-star statement, you’re going to go over budget.’’

Carlin’s latterly been based on Australia’s Gold Coast but has returned to his former hometown to supervise construction and manage the fitout.

‘‘I think in partnership with Kevin we can really create something incredibly special here in Queenstown.’’

He’s also delighted to have skin in the game — ‘‘it makes it extremely interesting’’.

‘‘We’ll be selecting a team that’s very aligned with the unique service culture and experience we’re going to develop.’’

Carlin’s of course hoping the trans-Tasman bubble opens before his hotel does — he has a private jet service ready to fly Aussies over.

‘‘But we’re not just looking for high-net-worth travellers — there’s lots of people in Queenstown that would love a ‘staycation’ for some special occasion.’’