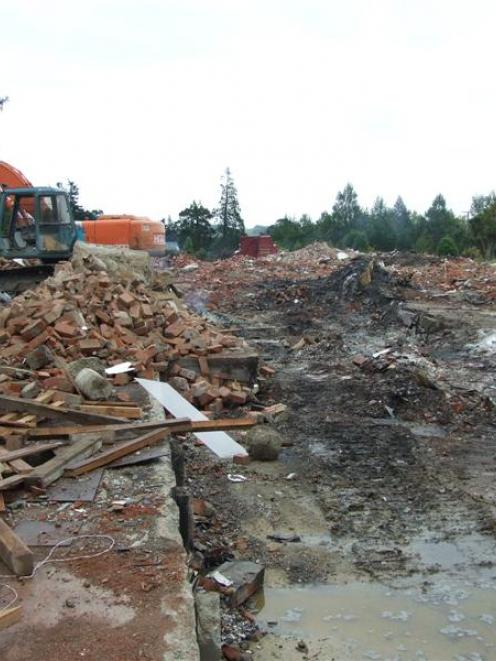 The pile of rubble left by the demolition on Tuesday of the Tapanui Hospital. Photo by Rachel Taylor.
A suggestion by the Clutha District Council this week that a burst water main in Tapanui may have been connected to a fire at the site of the town's now-demolished hospital is being disputed by the local fire brigade.

Council district assets manager Jules Witt said in a press statement on Wednesday the pipe burst about 2.30am that day and may have been related to a callout at the old Tapanui Hospital about 8 o'clock the previous night, "which would have meant high water flows and added strain on the main pipe."

But yesterday, Tapanui Fire Station Officer Rodney Stiven described that claim as "ridiculous", saying firefighters had not used much water in dampening down a rubbish fire and would not have placed any pressure on the section of pipe that burst.

"We were nowhere near it. We were 1.5km up the road. There are another three hydrants before that pipe," he said.

Mr Stiven said the section of pipe in question was on Sussex St, behind the Tapanui Community Centre.

"It went about a month and a-half ago. Where it burst, it's burst there before."

Mr Stiven believed the burst was related to the age of the town's reticulation system and the work the CDC is doing on upgrading the town's water supply.

West Otago ward councillor Peter McPherson said no-one could really say whether the rupture was caused by the firefighting effort placing strain on the pipe or not.

The Tapanui Hospital, opened in 1912 and closed in 1995, was demolished to make way for building the West Otago Integrated Family Health Centre and Rest Home.