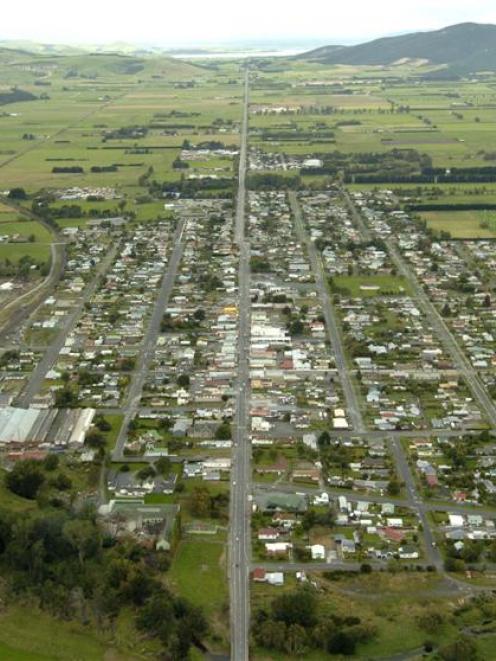 Air quality issues shroud the town of Milton. Photo By Gerard O'Brien.
Milton has a "very large" problem, as monitoring of the town's air quality shows readings much higher than the national standard and close to the region's trouble spot of Alexandra, Otago Regional councillor Stephen Woodhead says.

The regional council only began monitoring the town's air quality at the end of May, but already it has exceeded the standard on 36 days, with the highest daily value reaching 145mcg per cubic metre.

The National Environmental Standard is for the average daily PM10 level (particles less than 10 microns in diameter) not to exceed 50mcg in a 24-hour period more than once a year.

Cr Woodhead said Milton's air quality was nearly as bad as Alexandra's, which had one of the worst air quality records in Otago.

Alexandra had exceeded the standard on 52 days, with its highest daily value 150mcg.

The monitoring had upset some people in the town who did not have the level of understanding of air quality issues that Central Otago communities did, he said.

"It is a fresh issue to them."

Cr Gretchen Robertson said the high levels had major implications for the town and its industries, as for the regional council to issue resource consents the air quality would have to meet the standard.

Council air quality scientist Deborah Mills said as it was still early days in the town's monitoring, they were uncertain what or how significant the problem might be.

Anecdotal comments indicated the town had a huge reliance on coal heating as it was abundant and cheap, she said.

Added to this was the climactic conditions which seemed to mean any smoke from burn-offs in surrounding areas was blown into the town and stayed there.

Unlike other coastal Otago towns, like Oamaru and Dunedin, smoke just did not blow away in Milton.

"It's a surprise to us. Somehow, Milton is just not in the same situation."

Next month, at the end of winter monitoring, the temperature and wind readings would be examined to see if any pattern had developed.

The relationship between weather and emissions would also be looked at.

"Early this season, the temperature minimums were as low as Central."