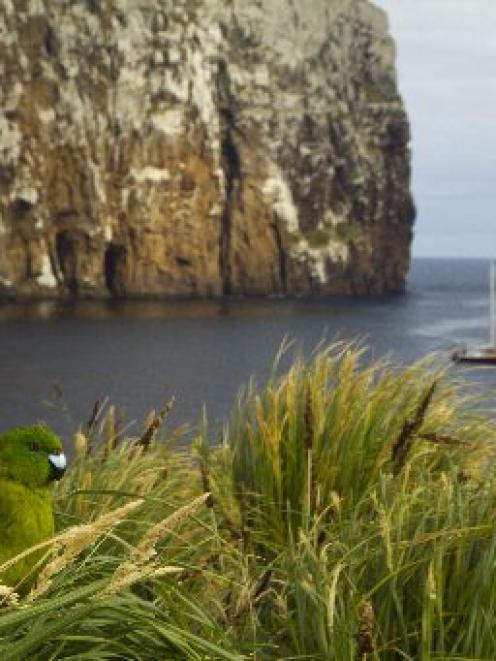 An Antipodes Island parakeet, endemic to the Sub Antarctic Islands, will benefit from a mouse eradication programme about to be undertaken. Photo by James Russell.
A campaign backed by Wellington couple Gareth and Jo Morgan has reached its target of raising $1 million to fund the eradication of mice from the Antipodes Islands, 860km south of Stewart Island.

Dr Morgan made the announcement at the 2013 Southland Environment and Conservation Awards in Invercargill on Wednesday evening, where the couple's charitable organisation, the Morgan Foundation, won the outstanding new initiative category award.

A trip to Antarctica and the Sub Antarctic Islands last year where they saw first hand the devastating impact mice have on the wildlife inspired the Morgans to set up the Million Dollar Mouse campaign.

The foundation matched all public donations dollar for dollar, with the Department of Conservation (Doc) agreeing to contribute one-third of the cost.

Dr Morgan said at the awards function he remembered the project stemming from a ''drunken promise'' made after sharing bottles of Central Otago wine with Doc staff.

He was reminded of the promise the next morning and decided he had better follow through, he said, to the amusement of the 350-strong audience.

Dr Morgan said yesterday it was ''really good'' the fundraising target had been reached.

The Antipodes Islands are a national nature reserve and within a Unesco World Heritage site. Mice were introduced by sealers in the early 1800s and are the only pests on the islands.

Doc Southland conservancy communications and engagement adviser Meryl Jupp yesterday said eradication work could start in the winter of 2015. Who would undertake the work had not been decided but it would be led by Doc, she said.

Dr Morgan said now the target had been reached for the Million Dollar Mouse campaign, his foundation could move on to other projects, including the plan he announced in May to make Stewart Island the world's first predator-free island with a substantial human population.

He has estimated the conservation plan to rid the island of all threats to wildlife, including domestic cats, could cost $40 million to $50 million.

''The Stewart Island project is hugely ambitious. There are a lot of rivers to cross yet with that one.''