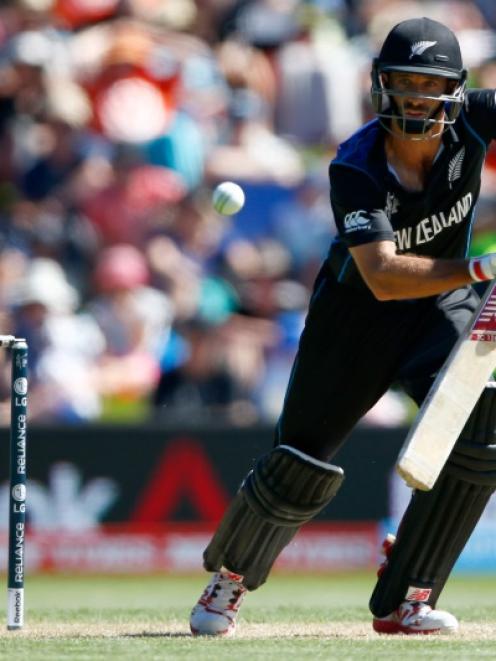 Grant Elliott. Photo by Getty
The crowd summed it up best.

They cheered in delight when Black Caps skipper Brendon McCullum won the toss.

Seconds later they groaned in disappointment when he announced the Black Caps would field first.

New Zealand was expected to be way too good for Scotland in their World Cup clash at the University Oval and those fears appeared to be confirmed within a handful of overs.

Scotland collapsed to be 12 for four. The visitors mounted a comeback - if you can call a total of 142 a comeback - through former North Otago batsman Matt Machan (56) and Richie Berrington (50).

But the Black Caps tried to sabotage what was a fabulous bowling display with a dismal batting effort. They lost seven - yes, seven - wickets in a reckless and clumsy pursuit of Scotland's paltry total.

A good chunk of the crowd had obviously come to see McCullum and others such as Kane Williamson bat.

But what batting the crowd got to witness from New Zealand was pretty poor.

The Black Caps let their high standards slip. They rushed their chase, with openers Martin Guptill (17) and Brendon McCullum (15) selling their innings short.

Ross Taylor (9) holed out in a familiar area - cow corner. Kane Williamson played a rare poor shot, throwing away a promising innings on 38.

Grant Elliott feathered an edge and Corey Anderson and Luke Ronchi displayed a disappointing lack of patience, finding fielders in the deep.

But while the batting was hasty and complacent, the bowling was accurate and clinical.

Trent Boult set the tone with his wonderful opening over, which accounted for Calum MacLeod and Hamish Gardiner in the space of two balls.

He got the ball to swing in and nip back, trapping the pair adjacent. The hat trick ball was wide of off stump and swung further away.

He had star batsman Kyle Coetzer caught at mid-wicket and then trapped Scottish captain Preston Mommsen in front.

Richie Berrington saw off Southee's hat trick delivery with the full face of the bat.

Anderson had some luck in his three wickets but Daniel Vettori bowled with superb control, taking three for 24 at a miserly economy rate of 2.88.

Three Scottish players registered golden ducks but Machan and Berrington added 97 for the fifth wicket, which formed the spine of Scotland's innings.

Scotland captain Preston Mommsen felt his team pushed the Black Caps ''very close'' and he was proud of the character his side had shown.

''I think the fight and character is something we are proud of and, overall, I think we are happy with our performance today,'' Mommsen said.

''From a batting point of view it is good that we've been exposed to that sort of skill this early in the tournament, so it is a massive learning day for us. Hopefully, we can use that to improve as this tournament goes on.''

Mommsen was pleased to have snaffled seven New Zealand wickets but was also not reading too much into it.

''I think it showed that their batsman were vulnerable if you are able to keep them under pressure. But at the same time, chasing that small total might be a little bit tricky for them and that might have changed the way that they play and what their natural game would usually be.''

The three-wicket win means the Black Caps retain their unbeaten record at the University Oval in all formats, while Scotland is still searching for its first win at a World Cup tournament.

The Black Caps play England in Wellington on Friday. Scotland's next match is also against England, but in Christchurch on February 23.