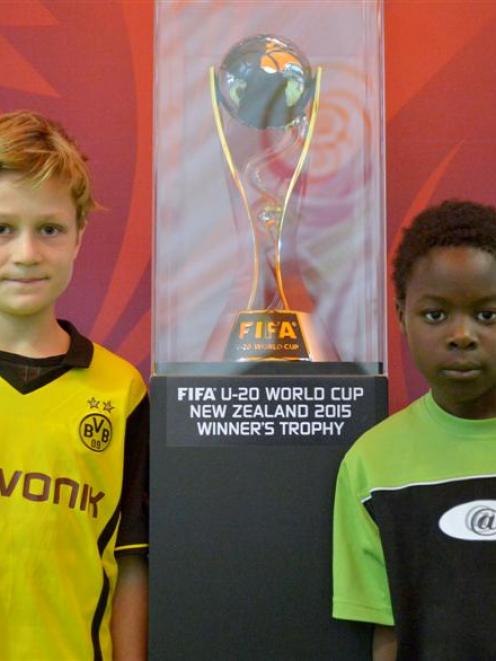 Dunedin football fans Finn Bielski-Cook (10, left) and Francis Potts (8) with the Fifa Under-20 World Cup at the Edgar Centre yesterday. Photo by Gerard O'Brien.
An illustrious visitor to Dunedin yesterday turned out to be a hard case.

The Fifa Under-20 World Cup toured the city to promote next year's tournament, which is billed as one of the world's 10 biggest sports events.

''You have to use white gloves whenever you take it out of the case and the security is very tight. I'm not allowed to let it out of my sight.''

Dunedin football fans lined up to have their photo taken with the gleaming trophy at Otago Boys' High School, the University of Otago and the Edgar Centre yesterday.

''People have really appreciated seeing it. The Under-20 World Cup is a huge event. This is when the big football scouts come to sign up the next Messi,'' Joy said. 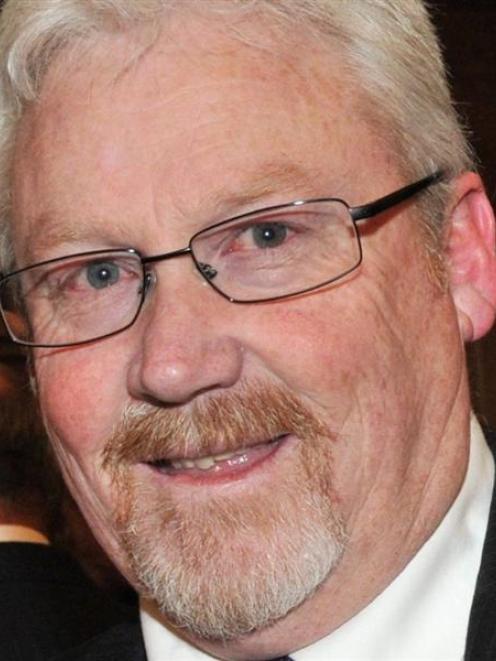 Aaron Joy
New Zealand has automatically qualified for the tournament as host country, while the other 23 countries will be decided after next month's Fifa World Cup.

FootballSouth chairman Matthew Holdridge said yesterday the event would be ''at least on a par with the Rugby World Cup''.

''The eyes of the world are going to be on us. The Under-20 World Cup has a global television reach of more than 170 million people,'' he said.

''It will be the biggest football sporting event we've ever seen in New Zealand.''

The trophy has been touring schools, sports clubs and malls this month to stimulate interest in the event.

''It is fantastic to have it here,'' former All White Mike McGarry, of Dunedin, said.

''It's such a prestigious event and it's going to bring people from all around the world to New Zealand.''

Dunedin will host seven games at Forsyth Barr Stadium from May 31 to June 10 next year. Fifa regulations require the venue to be renamed Otago Stadium for the duration of the tournament.

The Under-20 World Cup has been held every two years since 1977. France is the holder, while Argentina has been the most successful nation, winning six times.

The trophy visits Balclutha, Gore and Invercargill today, and Queenstown and Cromwell tomorrow, before travelling to the North Island.