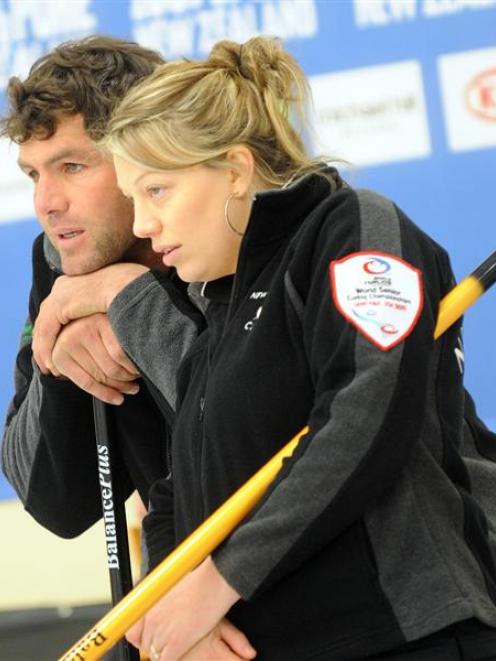 The New Zealand mixed doubles pair of Sean and Bridget Becker examine the head in the mixed doubles game against Latvia at the Maniototo International Curling Rink, in Naseby, yesterday. New Zealand won 8-5. Photo by Peter McIntosh.
It was a surprise when the Chinese mixed doubles combination of Liu Sijia and Han Yujun beat Switzerland at the Winter Games yesterday.

China beat the Swiss team of Irene Schori and Reto Seiler 6-5 at the Maniototo International Curling Rink in Naseby.

The win was added proof that China is becoming one of the international powerhouses of world curling despite being short of adequate ice rinks.

China has only three designated curling rinks, and the one in the capital Beijing is a private rink that is heavily used.

Because of the lack of facilities at home, the elite Chinese curlers travel to Europe or North America to train and compete.

China has punched above its weight in international competition over the past few years and continued this pattern yesterday when it beat a Swiss team that included double world champion Irene Schori.

The final result was close but China was always in control. It gained the early initiative and led 6-2 after five of the eight ends.

The third end was decisive because it gave the initiative to China and forced Switzerland to play catch-up curling.

China had two scoring stones in the house when Liu Sijia played the shot of the day and pushed between two stones to double the count and give China four shots.

China, Switzerland, New Zealand and Japan are the front runners with three wins and are the contenders to find a place on the podium on Sunday.

Japan and New Zealand both have a game in hand.

The Becker siblings - Sean and Bridget - started slowly and conceded singles to the Latvian husband and wife team of Ansis and Dace Regza.

The New Zealand combination that won a silver medal at the world championships in Russia last year then stamped their authority on the game by scoring a four on the third end.

Bridget Becker pushed out a Latvian stone to leave New Zealand with four scoring stones in the house.

It was the accuracy of the Becker's that was significant at this stage. A three on the sixth end extended the lead to 8-4 and sealed the game for New Zealand.

In the other mixed doubles games Japan beat Australia 8-3 and the United States had a narrow 7-6 win over HungaryChina is unbeaten in the women's competition with four wins and is being challenged by Japan that had a hard-fought 6-4 win against Korea.

On the ninth of the 10 ends Korea had the hammer (last stone) and Japan forced them to take one shot and trail 4-5.

This gave Japan the hammer on the last end and it blasted away and kept running all Korean stones out of the house and added an extra point.