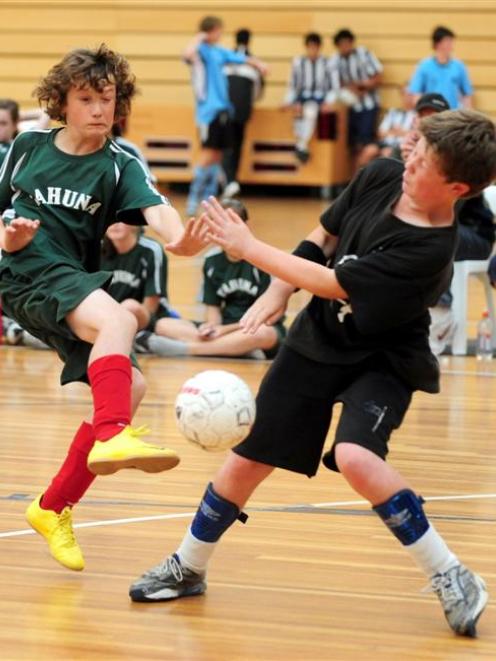 Tahuna's Damon Moss shoots past DNI goalkeeper Matt Dukes during the Otago regional futsal tournament at the Edgar Centre yesterday.
It is fast, it is exciting, it is over in 30 minutes and it is here to stay.

Futsal is on the rise, with more than 300 youngsters swelling the Edgar Centre for the past two days.

Competition was fierce with the top two sides in each grade earning the right to compete in the national schools tournament in Timaru in June.

Organiser Sam Buxton said Sport Otago's decision to help promote the game in the region's schools has created extra interest in the game and Buxton believes the sport will take off as a result.

"If it is big now; it is only going to get bigger," he said.

"It is a fast-paced game and it doesn't take up too much time.

Futsal is a five-a-side game of football, usually played indoors and with a smaller ball with less bounce than a regular football.

Logan Park High School beat Otago Boys' High School 4-1 in the final of the boys under-19 grade, and St Hilda's Collegiate beat Taieri College 2-0 in the girls under-19.

Tahuna Normal Intermediate beat beat Dunedin North Intermediate 2-0 in the boys under-13 while their girls team had a 6-0 win over same school.