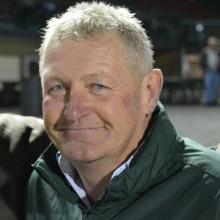 Graeme Anderson
It will be as if nothing has changed if trainer Graeme Anderson’s colours are seen in the winner’s circle at Forbury Park tonight.

The strike-rate trainer was regularly winning races at Forbury Park meetings until racing at the venue was halted earlier this year when the track’s future was in doubt.

After a reprieve, racing will be back at Forbury Park tonight and Anderson will be, too.

And though his set up has changed slightly – having new training partner Mike Love alongside him – the sight of the Westwood Beach horseman bringing a strong team to the track has certainly not.

The Anderson-Love combination’s biggest chance on their return to Forbury Park comes in race 8 with American Lightning.

The 3yr-old looks a class most above his rivals in the 2200m event.

The only concern for his trainers heading in to the race is that the horse has not been sighted publicly since winning at Oamaru more than six weeks ago.

“Everything is good with him,” Anderson said.

“They are older horses he is racing and I haven’t been able to get a trial or anything in to him.”

“But he has had a lot of miles in to his legs.”

“He seems well and I am happy enough with him without having to have knocked him around lately.”

Safely through his Forbury Park outing could head to a heat of the Sires Stakes Series at Addington.

Anderson and Love will start Bev’s K One for the first time from their stable in race 7.

The 4yr-old should find the race easier than some of her previous clashes with some of last season’s best 3yr-old trotters.

“She trialled nicely at Oamaru a couple of weeks ago, I was happy with her,” Anderson said.

“She has taken a bit of work, but I think she has enough ability.”

“She would be a chance if she did everything right.”

Cody Banner looks a serious player in tonight’s race after he unwound strongly from the rear of the field in his last start at Winton.

Who’s Smokin will be out to improve on her last start last placing at Winton in race 6.

Anderson hopes the mare can get a more economical run than in her last outing when she starts from barrier 2 in a junior driver’s event for Ellie Barron.

“She was probably a bit flat last time, she followed them around and got caught three-wide.”

“From that draw on Thursday night she could cross the horse inside her and get a nice run.”

“She has freshened up quite nicely.”

“It would be nice to see her get a quiet run for once in her life, rather than having to be doing the work.”

The 4yr-old ran her best race in three starts for the stable when coming from off the speed to run second at Winton.

Anderson hopes Love, who jumps in the sulky behind the mare for the first time, can bring Petrea Bromac in to the picture at the right time from her barrier 8 draw.

“She has got a bad draw, so she will have to go back at the start.”

“She doesn’t need to do too much early, which has been happening in her last two starts.””

“She went really good for us when she sat back and ran home well.”