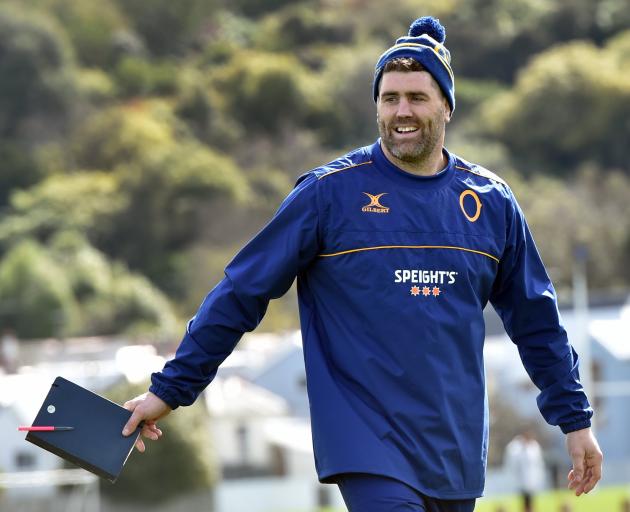 Prop and assistant coach Jamie Mackintosh at Otago training at Logan Park yesterday. PHOTO: PETER MCINTOSH
He has heard it all before.

Jamie Mackintosh — one-test All Black. Can’t scrum, falls over with a breath of wind, a guy who is just big and that is about it.

Well true, he is big. They do not call him Whopper for nothing.

But Mackintosh has matured into a thoughtful rugby man — an aspiring coach, who truly loves the game.

Mackintosh, who played more than 120 games for Southland, is an assistant coach for Otago this season. He will also play if the opportunity arises but just wants to help the team.

The big prop should know what the professional game is about. Now 35, he has been playing at professional level since he was 18.

"I still love playing. Maybe getting away from New Zealand was the best thing. My last four years in Pau [in France] was probably the best rugby I played," he said.

"All my scrumageing fell into place, had some good hookers, good tightheads. The Top 14 is a pretty tough place to scrum. I wouldn’t be there four years if I did not get that right."

He lost count of the number of professional games he has played.

"I probably listened to too much stuff I shouldn’t have listened to. As a young player you get caught up in it. If you enjoy reading good articles about yourself then you’ve got to be ready for the bad articles.

"Because what you are doing is basing your self-worth on someone who is not in your control group. You have got to be real focused on, like here is my control group: my coach, my parents, my mentor. If I am doing things right or wrong then that is the group that matters.

"I’ve still played 17 years — if I wasn’t good enough, I would have been turfed out of rugby long ago. There are certain strengths to my game and there are work-ons I have like any player.

"I think in my last year at the Chiefs, I think I started to understand the [scrum] rules; it suited me a bit better. When we used to scrum with those big gaps, it was like going to the lottery and buying a ticket.

"After a game in France, I would sit there were some of the best feelings — I was capable at playing at that level, was part of the team and had contributed. When your confidence is down and you are doubting yourself that can be a pretty lonely place. Every rugby player goes through it. I went through it heaps."

The former Highlanders captain played 4½ years in France for Pau before finishing up last December. He signed on to play and coach in Austin in Texas in the new United States professional league and played four games before Covid-19 ended the season.

He is heading back there for a January start to the season.

He is best mates with new Otago coach Tom Donnelly but did not put pressure on Donnelly to hire him.

"I sort of challenged Tom. It is your first year head-coaching, do you want to be stuck with a big Southlander? You don’t need that sort of stuff round your team."

Donnelly went away and decided he wanted Mackintosh and here he is.

"That doesn’t mean I’m a good coach. But I do love it and I want to pursue it.

"I’ve had some awesome coaches. Had a special relationship with Simon Culhane and David Henderson. They were very inclusive with the players. I learnt a lot under Jamie [Joseph]. His ability to motivate a team and to get us to believe in something. His smarts were awesome.

"Under the Chiefs, I learned unbelievable amount about defence under Wayne Smith. Dave Rennie and how he likes to arrange a week, the simplicity of his messages. In the back of my mind, I was always — jeez, I’ll use that. That’s pretty good. So I got a pretty full book over the years."