Rugby: Brown proud of deeds of 'great bunch of guys' 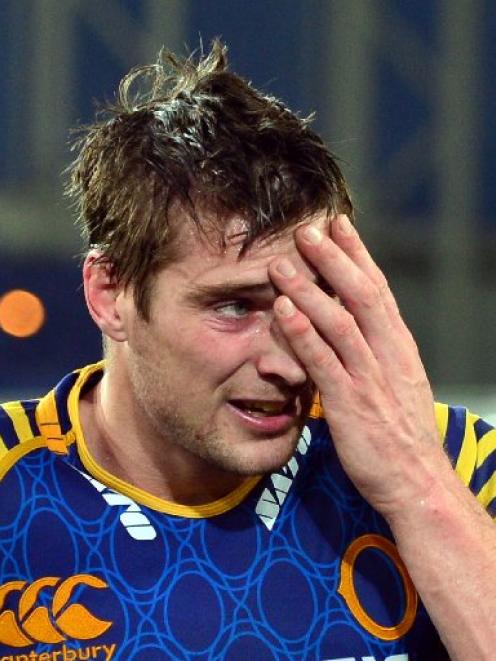 Paul Grant
Otago coach Tony Brown says he could not be prouder of his side, and no-one can take away the memories of the past nine days.

Brown also questioned why his side did not get a penalty near the end, which could have won his side the game.

Otago lost the Ranfurly Shield to Hawkes Bay in a nailbiter last night, but it was not through a lack of effort from the home team.

Brown was wholehearted in the praise of his side.

''They are a great bunch of guys. Every time they play they play for each other. They put their soul and every part of their body out on the field.

''I thought we had our chance to win. It was a great comeback from our guys. They played some good footy in that last 15 minutes. We probably should have won that game.''

Brown felt Hawkes Bay got away with a lot at the breakdown, which did not help Otago's game.

''The ref's interpretation at the breakdown hurt us. There was no more glaring point [than] at the end of the game. We should have got a penalty for not rolling away. I have never seen a scrum awarded in that situation.

''I don't think he was willing to pull the trigger in that situation. Rightly or wrongly he just didn't.''

Brown said in the first half, Otago got a few things wrong on defence and Hawkes Bay made the most of it.

Looking back, Brown said it had been a great experience since the side had lifted the Log o' Wood off Waikato.

''We have probably had nine of the best days of our lives . . . it has just been amazing for Otago rugby and Otago.

When there is a buzz about Otago rugby it is great to be in Dunedin.''

Otago captain Paul Grant said there was not much between the sides.

''They had a lot of ball in the first half and we were struggling to get a hold of the ball. But it went right down to the wire, in front of the big crowd, but it was not meant to be,'' Grant said.

''We struggled to get the ball back from our kicks. It wasn't through lack of energy or anything. They had a good game plan, too.

''We knew once we got a hold of the ball, we could start to make a few inroads into their defence.''

Grant said no-one could take away the memories of the past nine days.

Prop Scott Manson said the game was very close, and the side suffered from not having enough ball.

''In that second half our backs had a wee bit more ball and a few more dominant carries and that helped us get back into the game.''

Otago has picked up a couple of injuries, with flanker Gareth Evans nursing a sore ankle, while Jayden Spence also damaged his leg.

Hawkes Bay captain Mike Coman said the victory was taking time to sink in but he was very happy to finally bring the shield back to the Bay.

Its first defence is against Counties-Manukau on Saturday.

Otago will take on Tasman in Nelson on Friday night.