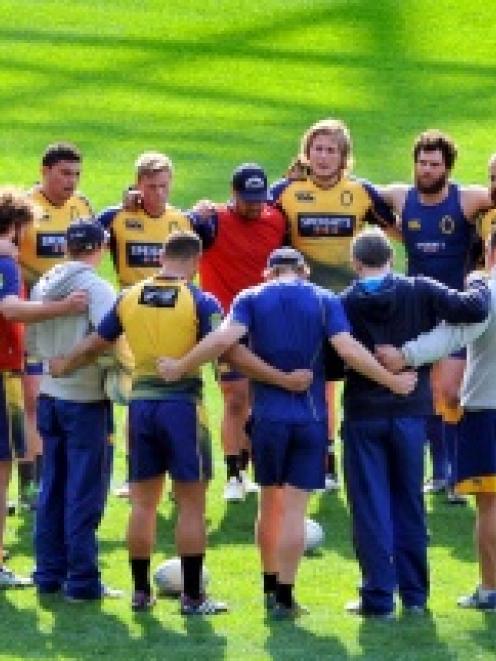 The Otago team stands in a huddle at Forsyth Barr Stadium earlier this week. Photo by Craig Baxter.
Otago - the province that is - has been in celebration mode for most of the week.

But the men who started the party have left that far behind.

For them - the Otago ITM Cup side - the Ranfurly Shield festivities were over by Monday. It was all about looking forward to the first defence.

By Monday, it was time to park the bus, get out and start on a new journey.

They had the shield to defend, after all.

There is no point giving up the trophy in week one after having waited more than 20,000 days to have it. The first week has been a great ride and no-one wants to jump off so quickly.

The team had a good blowout on Tuesday to get rid of any cobwebs.

Coach Tony Brown said the side did not have any trouble switching on this week to the game, and the first challenge, against Hawkes Bay.

''It was quite easy really to come down. The guys know they have a game to play. Training this week has gone really well. It is not any different from any other week,'' Brown said.

''It is about getting into our work, everyone doing their jobs and playing as well as can be. Everyone knows the shield is on the line.''

It is completely new territory for the Otago players. Two weeks ago against Bay of Plenty there was a crowd of under 4000 watching the side grab a narrow win.

The union is hoping for a big crowd tomorrow and, by late yesterday afternoon, just over 14,000 tickets had been sold.

Otago should lap up the support and make the most of the home crowd, Brown said.

''I just think it is really exciting for Otago and rugby. Getting a big crowd into the stadium. The guys just need to get out there and enjoy it ... the way Otago rugby should be.''

Brown said the nine-day break was a bonus as it would ease any aches and pains picked up from the intense challenge against Waikato.

Hawkes Bay was a powerful-looking side which had the ability to strike from anywhere, Brown said, and his players needed to be on the ball defensively and make sure they did the basics well.

Hawkes Bay has named a side with plenty of class although it will have to do without a couple of key players.

Chiefs utility back Andrew Horrell has not been named as he is not over a knee injury picked up in the Super 15 final.

Experienced flanker Karl Lowe has not recovered from sore ribs and so Brendon O'Connor starts in the No 7 jersey.

All Black prop Ben Franks will start off the bench for Hawkes Bay but is bound to be injected into the team early.

Hawkes Bay has not held the shield for 44 years and failed twice last year in challenges against Taranaki and Waikato.

Forgetting about the shield for a moment, this actually looms as a key game in the ITM Cup. Both are real contenders for the Championship and Otago has started the season with two wins over premiership teams.

If it can beat Hawkes Bay then it has a real leg-up in the race to finish top of the Championship.