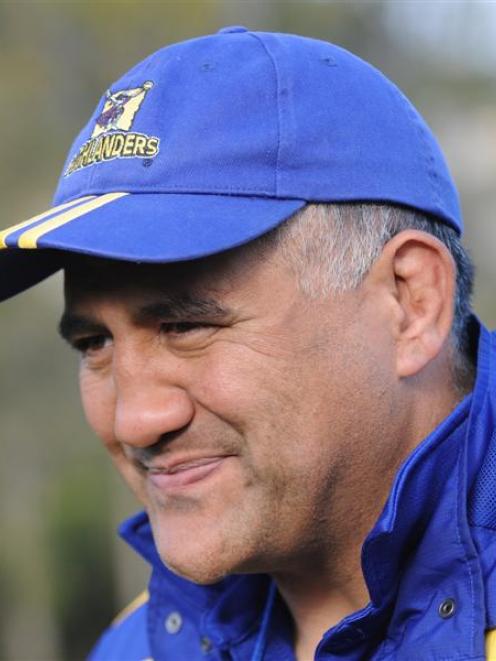 Jamie Joseph
For season-defining, this one probably takes the cake.

Highlanders coach Jamie Joseph joked last week that every game his team had played so far could be seen as season-defining, such was the tightness of the competition, and the narrow margin between teams.

But the outcome of tonight's game will go a long way to making or breaking either side's season.

The two sides are separated by just five points on the table, and with the Crusaders - current injuries and form aside - looking like one of the New Zealand teams to feature at finals time, the other team to come from New Zealand should be either the Blues or Highlanders.

Such is the format of the new conference system it is unlikely more than two teams from any country will make the six team playoffs.

With the Hurricanes and the Chiefs drifting off the pace, the Blues and the Highlanders will have it all to play for when they clash for the first time tonight.

Looking at the firepower on both sides, the Blues have the more potent weapons.

The likes of Isaia Toeava, Rene Ranger and Luke McAlister are exciting players who have the ability to break a game open and create something out of nothing.

They will take a mile when an inch is offered.

Backed by a pack which has added some steel this year, the Blues do look like a mighty force.

But that does not mean the Highlanders should simply put the white flag up tonight.

The grit they have shown this year should give them plenty of encouragement, and they have executed well this year.

Guts and determination can only get you so far, though.

There has to be some finesse and talent to actually put the points on the board. And the Highlanders have delivered plenty of that.

Players like Kade Poki, Robbie Robinson, Ben Smith and Josh Bekhuis have displayed bucketfuls of skill around the paddock.

That is what has been winning matches, accuracy at the right time, and the ability to take chances. More is needed of that tonight.

This is a big game for Adam Thomson, who faces up to his All Black rival, Jerome Kaino, one of the best blindside flankers in the game and Thomson will have to show the physical side of his game to please those important men watching in the stand.

The loss of Tony Woodcock will hurt the Blues, as much as for his mobility around the field as his scrummaging.

Apart from the important competition points, the Gordon Hunter Memorial Trophy is at stake.

The Highlanders last held the trophy in 2006, when they beat the Blues 25-13 in Dunedin.

Joseph was one of those players who thrived under Hunter as the Otago team thrilled crowds in the early 1990s and will be instilling Hunter's virtues in his team before tonight's match.

"It is special for me, because he was my coach and also a very dear friend. But my message to the players is that he was a very sincere and loyal Highlander man and if we can go out there and put a performance on for him, we will," he said.

"Our team doesn't lack confidence playing against anybody. But we will have to be very good to beat the Blues with the amount of x-factor players they have. They've won six or seven games in a row."