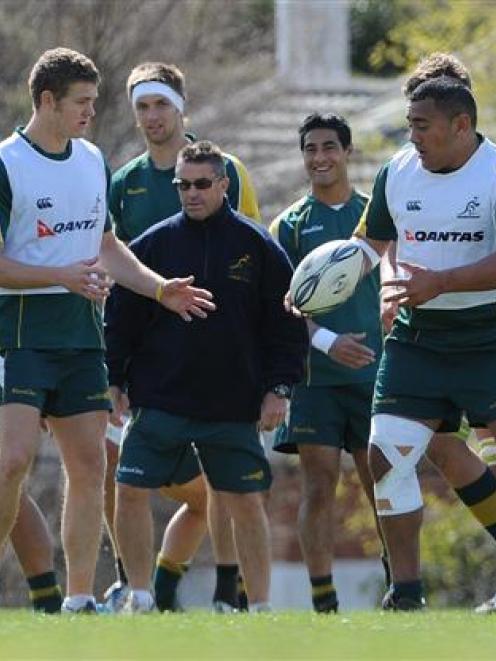 Phil Kite (centre) passes the ball to team-mate Lindsay Crook as skills coach Andy Clark (wearing sunglasses) looks on during an Australian Schools rugby team training session at Bishopscourt in Dunedin yesterday. Photo by Peter McIntosh.
Australian schools coach Pat Langtry is expecting a close game against the New Zealand Schools side in Dunedin tomorrow, and he should know.

Langtry, the deputy principal at St Edmund's College in Canberra, a school which has produced Matt Giteau and George Gregan, has been involved in coaching the Australian side on and off since 2001.

In all that time, the games between the two sides had been close, he said.

"If you have a look at the record over the years there is usually only a handful of points in them.

Usually the team which gets presented with an opportunity and takes it gets the best outcome," he said.

Australia won the games in 2007 and 2008 but New Zealand triumphed 28-24 last year, and Langtry said there had been nothing in the games over the past three years.

The Australians have had a solid build-up to the match at Otago Boys High School, having played six games this season, winning them all.

They beat Samoa schools in Apia and Sydney, a Samoan schools selection in Apia, Fiji schools in Sydney, a Waikato under-19 side in Hamilton last Wednesday and Tonga Schools 22-3 in Auckland on Saturday.

Langtry said his team still had plenty to work on.

"I've not really been happy with the way we have played here in New Zealand.

It's been tough for us to adjust from playing in a tropical climate to then go and play in a different hot but dry climate.

"But that is no excuse.

We've got to get out there and play to the best of our ability."

The side has three players back from last year - lock Curtis Browning, hooker Huge Roach and winger Chris Feauai-Sautia - and is captained by lock Steve Cummins.

The 27-strong squad has one player from Western Australia, three from the Australian Capital Territory, 12 from New South Wales and the rest from Queensland.

Five players are from King's School in Sydney.

The youngest member is lock Samuel Reiser, who is new to the second row.

Up until the end of last year he was playing centre, but his school coach recommended he move into the pack.

Standing 1.97m tall, the 16-year-old could not crack his state side but stood out in the combined states side at the national tournament and won his selection to the top team.

Prop Gary Neugebauer is the only Western Australian in the side.

He was born in South Africa but moved to Perth three years ago with his family.

The 17-year-old said making the national side was a real step up, and he was fully committed to Australia.

"You've got to compete with Aussie rules, football and rugby league, and Aussie rules is creeping into some of the bigger population areas.

The AFL is setting up franchise in areas like Western Sydney.

They have slick marketing teams who really are competing for players.

"But we work in well with the Australian Rugby Union, who have an excellent development programme."